The Feed the Future Biotechnology Potato Partnership will develop and bring to market a 3 R-gene late blight resistant potato to smallholder farmers in Bangladesh and Indonesia.

Why Feed the Future? The global population is projected to exceed 9 billion people by 2050, global food production has to rise by at least 60% to feed our world. Feed the Future puts America’s engine of opportunity and ingenuity to work abroad.*

Feed the Future is America's initiative to combat global hunger and poverty. The initiative works to give families and communities in some of the world’s poorest countries the freedom and opportunity to lift themselves out of destitution. By equipping people with the knowledge and tools to feed themselves, we are addressing the root causes of poverty and hunger, helping people end their reliance on aid, and creating important opportunities for a new generation of young people, while building a more stable world.*

Why a Partnership? Feed the future uses the best parts of American leadership, entrepreneurship, research, technology, and talent to help some of the world’s poorest countries and communities harness the power of agriculture and entrepreneurship to jumpstart their economies and create new opportunities for people at every level of their societies. Feed the Future is backed by the efforts of 11 U.S. departments and agencies, partner governments from around the world, global organizations, and leading American businesses, non-profits, universities, and research institutions.*

Why Potatoes? Potatoes feed the world. The potato is the third most important food crop in the world after rice and wheat in terms of human consumption. More than a billion people worldwide eat potato, and global total crop production exceeds 300 million metric tons. Since the early 1960s, the growth in potato production area has rapidly overtaken all other food crops in developing countries. It is a fundamental element in the food security for millions of people across South America, Africa, and Asia, including Central Asia.

Presently, more than half of global potato production now comes from developing countries. Potatoes are an excellent, low-fat source of carbohydrates, with one-fourth the calories of bread. Boiled, they have more protein than maize and nearly twice the calcium. An average serving of potatoes with the skin on provides about 10 percent of the recommended daily intake of fiber.**

Why Late Blight Resistant? Late blight, the most serious potato disease worldwide, is caused by a water mold, Phytophthora infestans, that destroys leaves, stems, and tubers. This fungus is one of the world's most devastating plant diseases. It is spread very quickly and can result in total crop loss. Late blight was responsible for the great Irish potato famine in the mid 1800's. To protect crops, farmers spray very heavy concentrations of fungicide which increases material costs and labor; and increases potential risks to the population and environment.

Why Smallholder Famers? Feed the Future research has identified that growth in agriculture has been shown to be at least twice as effective as reducing poverty as growth in other sectors.*

Why Bangladesh and Indonesia? These South Asian countries are actively engaged in finding solutions to feeding their populations and increasing the standard of living for their smallholder farmers.  The potato will play a critical role in meeting their goals. 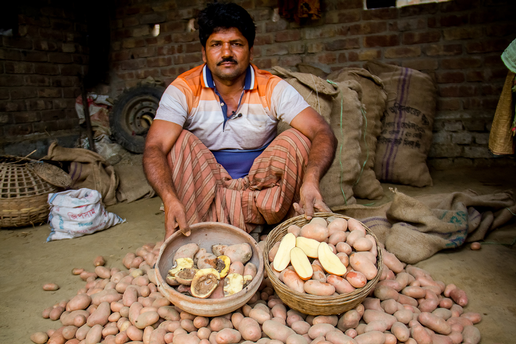