The Rogers Reserve was donated by Ernie and Mabel Rogers to Michigan State University in 1990. The Rogers were a prominent couple in the Jackson community, concerned with natural resources and food production. In 2002, at the bequest of the Rogers, an endowment was established to support the farm. Funds have been spent improving the farm and constructing Phase I and II building projects with the MSU Office of Land Management. Phase I, consisting of a steel pole building to house equipment, including a chestnut peeling line, was completed in 2005. Phase II was completed in April 2010 and consists of a wet lab, analytical lab, office and restrooms. The chestnut peeling line was purchased from Italy by the Midwest Nut Producers Council, supported by funding from the USDA Rural Development program. It is the only commercial chestnut peeling line in the western hemisphere. 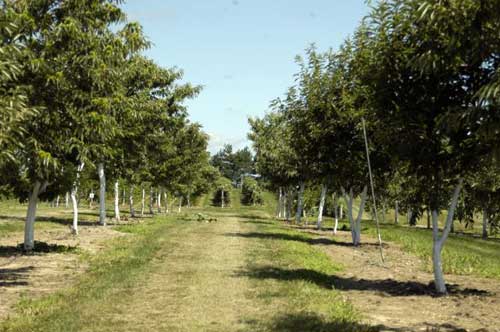 Ernie Rogers was very interested in American chestnuts because chestnut blight was killing American chestnuts when he left his native Pennsylvania home and moved to Jackson, MI. When he found professor Dennis Fulbright working on American chestnuts in Michigan, Ernie offered his farm to grow the trees Fulbright was studying. It was on his farm that Ernie watched American chestnuts take root and produced their first crop of nuts. Edible sweet chestnut orchards have sprung up across Michigan. According to the Ag Census of 2007, Michigan has the largest number of growers and the most acreage of any state.