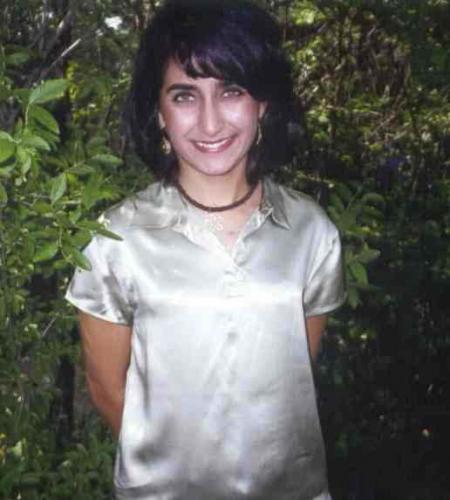 Rachana was a vibrant, beautiful young lady whose desire to experience life to its fullest reached out to engulf and inspire those in her path. The word Rachana, in the Sanskrit language, means creation and Rachana was truly a creation of sweetness and love.

Rachana was born in the Rajendra Hospital (the name is a coincidence), Patiala, Punjab in India and was nicknamed 'Munia,' meaning a young and sweet girl. When she was three years old, she came to the U.S. with her parents, Dr. Kunwar Rajendra and Shanno, who have been residents of East Lansing ever since. She loved birds, flowers and nature very much and made others in her life a priority for her time and attention. She had pet birds from childhood onward, and even tried to take a parakeet for a walk in the neighborhood!

Rachana was a 1987 graduate of Okemos High School, where she was an active athlete in Varsity gymnastics, soccer and swimming. While attending the University of Michigan at Ann Arbor, she established herself as a leader of strong character, serving as a teaching assistant, an orientation leader, and a member of the Michigan Student Assembly. In 1992, Rachana graduated from the University of Michigan with a Bachelor of Science in Electrical Engineering. After graduation, she extended her volunteer efforts to embrace community activities such as reading to the blind and volunteering at soup kitchens. She was employed by GTE in Raleigh, North Carolina, in the field of Radio Frequency Engineering, and had earned the Engineer-in-Training designation leading to Professional Engineer license certification. Her excellence in engineering was recognized by GTE, which honored her with five teamwork and quality awards.

Dedicated to living life to the fullest, Rachana was an avid sportswoman, a great skier, snow-boarder, hiker and tri-athlete. She was also an accomplished classical Indian dancer, graduating to a professional status in Bharat Natyam in May 1984. Rachana, along with her two sisters, Archana and Anuja, performed Indian dances as the Rajendra Sisters Dance Troupe in the United States, Canada, and India.

After spending a truly memorable Christmas and New Year at home with her family, including the visiting grandmother from India, she left by car for her job in Raleigh accompanied by her most favorite friend, a beautiful bird nicknamed Mango. In fact, she decided to drive home from North Carolina for the first time, because she was anxious to share Mango with everyone at home and the airline could not accommodate the bird cage due to some last minute changes in their plans. She would not make it back to Raleigh, nor would Mango. An automobile accident in North Carolina tragically took Rachana's life.

Rachana's family and friends wanted to continue to share her love of birds, nature and people with the rest of the world. Thus, the idea of the Rachana Rajendra Neotropical Migrant Bird Sanctuary was born. Inspired by Rachana's creativity, energy, and determination, her family also opened the Moon-Baked Creations Art Lounge and Cafe in Okemos, which continues to operate under new ownership.

Rachana was an incredible gift to all who knew her or came in contact with her effervescent smile, humor and grace! In her brief moments on Earth, she captured the essence of what a stroll in the Rachana Rajendra Neotropical Migrant Bird Sanctuary at Michigan State University would be. She often wished:

Heaven’s Flyers
Some say they don’t believe
That Angels can be seen or heard.
What a shame such blindness
What a pity such deafness
When the Song of Songs abounds…
And Heaven’s flyers are all around…
Only thinly disguised ... as birds.
-Anonymous