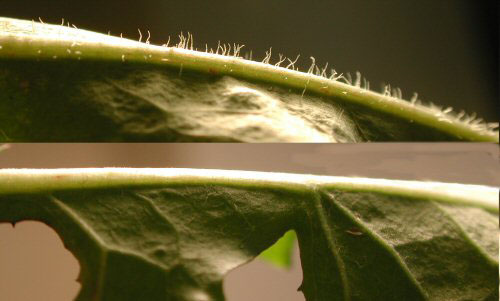 Common dandelion is a simple perennial (no branching) with a basal rosette that has deeply lobed leaves that generally point  back towards the center of the rosette. Probably the most common weed in maintained turf. Dandelion can tolerate a wide variety of site conditions and soils. A well tap-rooted perennial, dandelion forms a simple rosette of leaves and produces bright yellow flowers on leafless stalks. Dandelion produces a puffball seedhead globe very rapidly after mowing. The seeds are easily dispersed by wind and tracking on equipment. The bright-yellow flowers are easily identifiable in April.

Because dandelion is so common, many people assume other weeds to be dandelion.

Those weeds most often mistaken for dandelion are chicory, catsear, curly dock and perennial sowthistle. Chicory is probably most frequently misidentified as dandelion as they both have jagged, deeply-toothed leaves in a simple perennial rosette. The lobes on chicory are often not as symmetrical as dandelion and they will point out and away from the center. Chicory leaves have a row of spines along the mid-rib on the underside of the leaf that is absent on dandelion.

Curly dock has very wavy margins which can initially appear as lobes. However, closer inspection will reveal that curly dock has lacks that toothed lobes of dandelion. Sowthistle can easily be distinguished from dandelion by its the spines that run along the edge of the leaf.