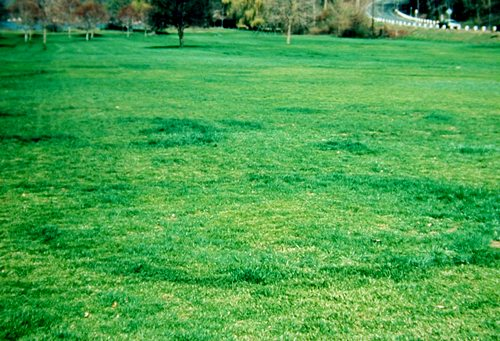 Fairy rings tend to grow in circle shaped patterns through the organic matter in the soil, mat, and thatch, first appearing as dark green circular rings or arcs in the turf. Rings can range from less than one foot to more than 100 feet in diameter, and often appear as areas of increased growth, known as the "zone of stimulation." In periods of heat or drought stress, affected areas may result in dead rings of turfgrass. The area of stimulated growth is thought to be due to organic matter breakdown which releases nitrogen sources, subsequently made available to the turfgrass plant.

Fairy ring fungi live and survive by spores or other means in dead organic matter in the soil or thatch. Most prevalent in sandy soils, these fungi are thought to be former forest dwelling fungi, which have turned into true saprophytes. Fairy rings occur in many different shapes, sizes, and patterns, some may be accompanied by above ground fruiting mushrooms known as basidocarps.