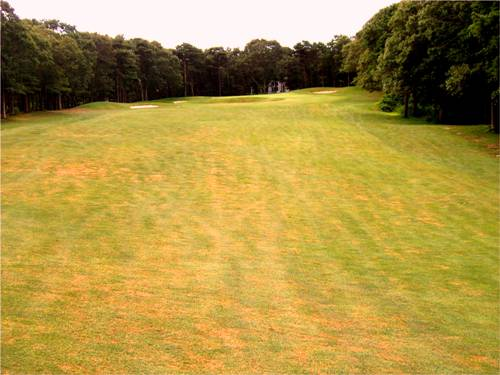 Anthracnose can occur as both a foliar infecting and crown infecting disease. Foliar infecting anthracnose is characterized by irregularly shaped patches of yellow-bronze turf, ranging in size form a few inches to several feet. Leaf lesions initially appear as elongated reddish brown spots on the leaves, which may enlarge, eventually encompassing the entire leaf blade. Black, pepper-like, fruiting bodies (acervuli) of the fungus can be seen on the foliage and crown as the disease progresses.

The fungus can overwinter as a saprophyte in plant debris or as a pathogen in infected tissue. It is most often seen in turf growing under low soil fertility and high temperature stress. The pathogen usually infects tissue from the tip down, especially on freshly mown turfgrass. The disease is most severe in areas of compaction heavy traffic, and poor soil drainage, and can occur in a wide range of temperatures.