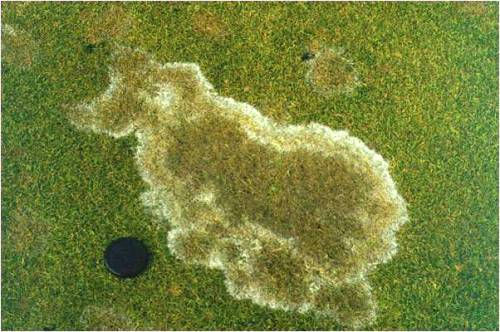 This disease is important in northern regions of the United States, where snow cover remains on the ground for extended periods, usually 3 months or more. After the snow melts in the spring, symptoms can be observed as circular straw-colored or grayish brown infection centers in the turf. The spots range from 3 inches to 24 inches (7.6 cm - 60 cm) in diameter, but most are between 6 and 12 inches (15-30 cm). Infected turf is matted down with grayish white mycelium of the fungus often seen along the margins of the diseased area shortly after snow melt.

Typhula blight is worse in winters when snow falls on unfrozen turf. The fungus grows and infects at temperatures between 30 and 55° F (-1° and 12.7° C). The two species T. incarnata, and T. ishikariensis can be distinguished by the fruiting structures, or sclerotia, they produce on infected turfgrass. T. incarnata produces relatively large, copper-colored sclerotia with diameters that are typically larger than the width of the grass blade, while T. ishikariensis produces small, black sclerotia whose diameters are less than the width of the grass blade. T. incarnata is most significant in the eastern U.S. and Canada, and T. ishikariensis prevails in the colder regions of the world, where snow cover remains for three or more months.