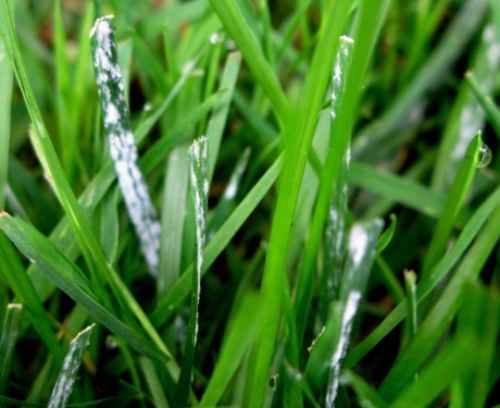 Turf affected by the disease have a grayish white cast, with initial symptoms appearing as white patches on the leaf blade. Eventually the whole leaf blade becomes covered by a white mass of spores. Leaves begin to deteriorate, turn yellow, and eventually die, and brown to black fungal structures (cleistothecia) may be seen.

The pathogen can overwinter via specialized structures, and germinates in the spring of the year infecting turf in the late spring or early summer. Secondary spore production on leaves serve to re-infect new grass plants throughout the season. The pathogen is favored by cool cloudy conditions and high humidity. The disease also only occurs in turf located in areas where sunlight is at a minimum due to shade.