As in the past, I am providing my 2009 prediction of Red Haven harvest onset for Berrien County. The goal is to help growers, shippers, marketers and buyers plan their season. For Michigan, the start of significant peach volume is with the Red Haven season. Although the acreage of this variety in Michigan has declined with the availability of new varieties, it still is the most widely grown peach variety in Michigan.

The estimate is based on records I have collected on commercial Red Haven harvests in Berrien County since 1995. The Red Haven harvest onset model is based on weather data at the SW Michigan Research and Extension Center automatic weather station approximately four miles southwest of Benton Harbor, Michigan. Regression analysis was used to determine a relationship between degree days and onset of harvest. The resulting predictive equation is D = -0.0386x + 234.9, r2 = 0.752, where x is the cumulative growing degree days (GDD) base 50 from January 1 through June 3 and D = the estimated harvest day of year (e.g. January 1 = 1 and December 31 = 365 in a non-leap year). The estimation is for the onset of the main season Red Haven harvest, and not the peaches with split pits that ripen several days earlier than peaches without split pits.

For 2009, the estimated onset of Red Haven is predicted to be August 3, which is nearly average for Berrien County. The estimated harvest dates, given by the line, are generally within a few days of the actual observed harvest (Figure 1).

As a further possible extension of the model, it was used to estimate Red Haven harvest (non-split pit) for four locations in addition to SWMREC. The spread of harvest dates were from August 3 in the extreme south to August 12 at the NW Michigan Horticultural Research Station, northwest of Traverse City.

The application of the model to other locations is only preliminary. In applying this model, it is important to bear in mind that heavy crop loads and cool weather shortly before harvest can slow down peach harvesting.

Prediction of onset of Red Haven harvest season based on growing degree day base 50 accumulation from January 1 through June 3. The regression line is the predicted harvest day (day of year) and the dots are the actual observed harvest days for 1995 through 2008 in Berrien County. 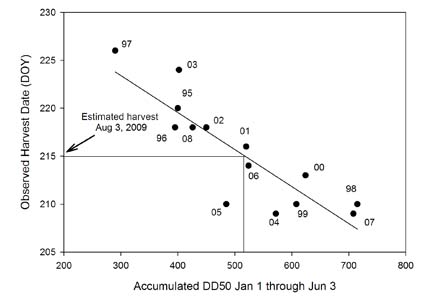 Correlation of Red Haven harvest with GDD base 50.