A prolonged drought throughout most of Michigan in 2012 weakened many landscape trees, making them more susceptible to borers, bark beetles and some disease problems. For example, the Austrian pine trees in the median of I-69 as you drive between Lansing and Marshall, Mich., look terrible this spring, with approximately 30 percent of them being dead or nearly so. These trees suffered severe drought in 2012, which apparently has increased the Zimmerman pine moth and Diplodia activity last summer, fall and this spring. Some of the needlecast pathogens also appear to be playing a role.

Another good example is a recent study of emerald ash borer at the Michigan State University Hancock Research Farm. Trees with adequate sunlight and soil moisture grew rapidly and received adequate protection from basal drenches of imidacloprid made every year or every other year, while shaded and drought-stressed trees grew slowly and were much more susceptible to attack from emerald ash borers, even when receiving the same insecticide treatments. 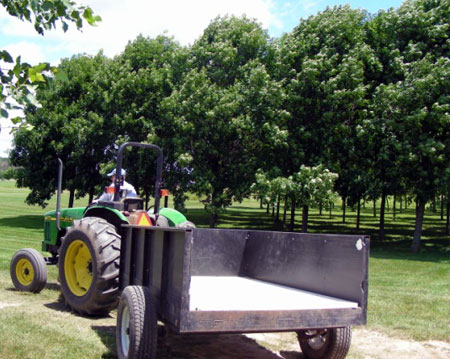 Many types of trees are susceptible to borers when they are drought-stressed. I would put some of our imported trees at the top of that list: Austrian pine, Scots pine, honeylocust and blue spruce, for starters. However, all of our trees become more susceptible after severe drought stress.

Valuable trees can be protected from drought stress in the future by watering during dry periods. Trees that were stressed in 2012 and have branch dieback can be treated for borers to help them recover. A good review of the best products to use to protect trees from borers, available at www.emeraldashborer.info, is “Insecticide Options for Protecting Ash Trees from Emerald Ash Borer.” When treating trees with symptoms of borer damage, remember that the insecticide treatments will protect the trees from new borer damage this coming year, but it will not erase the damage already done from borers last fall and this spring. Even protected trees may need two to three years to recover from a severe borer attack.

The most effective treatments, like trunk injection with emamectin benzoate, can also be an excellent tool for diagnosing borers and other insect pest problems. For diagnostic purposes, Michigan State University Extension recommends trunk injecting some trees while leaving other trees of the same type, size and condition untreated for comparison. Within a year you will know how much the borers and other insect pests were affecting the trees by comparing treated to untreated trees.

Irrigating with lake water during drought and dry weather