2016 status of herbicide-resistant weeds in Michigan

Last year saw a record number of submissions for herbicide resistance screening of weeds; be aware of new confirmed cases in your area.

In the fall of 2015, the herbicide resistance screening returned to Michigan State University Diagnostic Services after spending many successful years under the direction of MSU weeds specialist Christy Sprague. The 2015 season saw a surge in submissions, with a total of 46 samples, a 40 percent increase over 2014. The samples included three Palmer amaranth, three Powell amaranth, 10 common waterhemp, nine common ragweed, three common lambsquarters and 18 horseweed/marestail. Each sample received was tested for resistance to five or six herbicide Sites of Action, with all testing being sponsored by the Michigan Soybean Promotion Committee. Please view the listing below for the new incidents and locations of resistance that were confirmed. A cumulative listing of confirmed herbicide resistant weeds by county is currently being compiled and will be made available through the MSU Diagnostic Services website soon.

We will be conducting herbicide resistance testing again in the fall of 2016. Please view “How to submit a sample to MSU Diagnostic Services” in the back of “2016 Weed Control Guide for Field Crops,” MSU Extension bulletin E0434, for more information on submitting a sample. Also, we have produced a new publication, “Tips for collecting weed seeds: Ensure your resistance sample gets tested,” to reduce requests to re-collect seed. Samples for testing in 2016-17 will need to be submitted by early November to ensure enough time for our team to break seed dormancy and conduct the screenings. If you have any questions regarding sample submissions, please contact me at hiller12@msu.edu for more information.

New county locations and incidents of resistance confirmed from 2014

*G# refers to the herbicide site of action group.

Maps of glyphosate and multiple-resistant weeds in Michigan 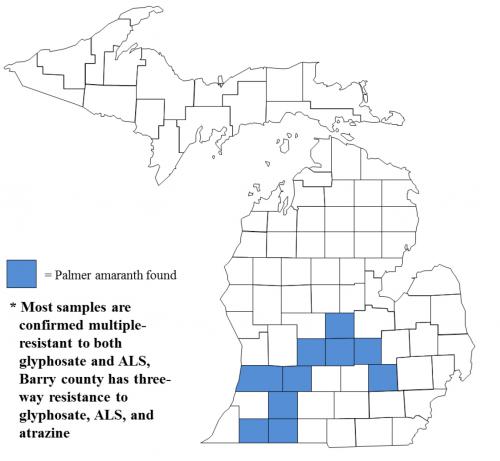 Palmer amaranth distribution in Michigan. Most samples are confirmed multiple-resistant to both glyphosate and ALS, Barry County has three-way resistance to glyphosate, ALS and atrazine. 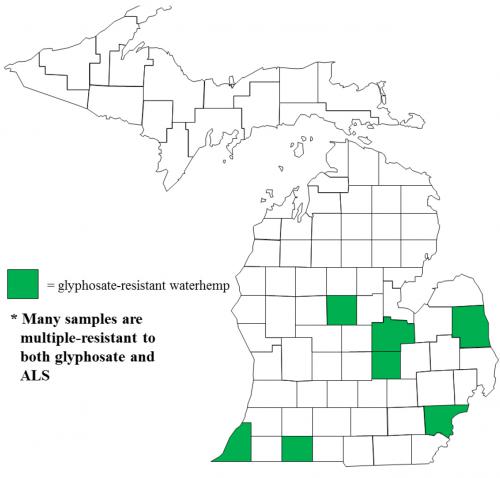 Common waterhemp distribution in Michigan – glyphosate resistant. Many samples were multiple-resistant to glyphosate and ALS. 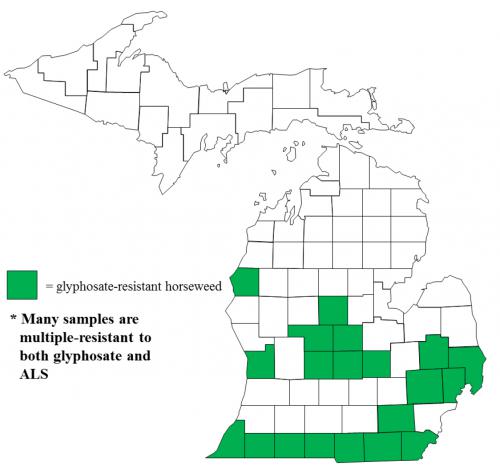 Horseweed/marestail distribution in Michigan – glyphosate resistant. Many samples were multiple-resistant to glyphosate and ALS. 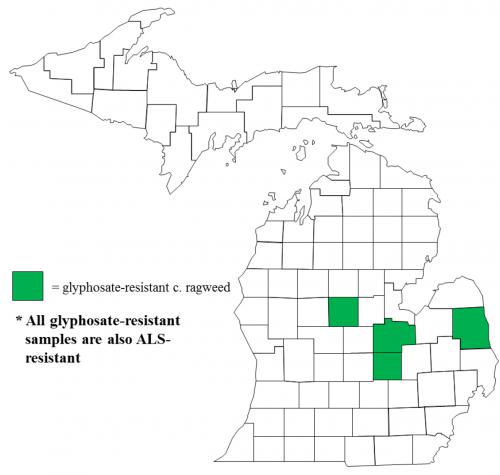