One new case of herbicide resistance was identified in Michigan from the 2017 growing season.

In 2017, fifty-three samples were submitted for herbicide resistance screening to MSU Plant and Pest Diagnostic Services. This is a slight decrease over the previous year’s 70 submissions. Thirty-five of the samples were sponsored by the Michigan Soybean Promotion Committee Weed Resistance Sampling Program.

This season brought a greater diversity in submissions from non-sponsored cropping systems; 12 were submitted as part of a Michigan State University Extension asparagus study and six others were collected in field crops rotations without soybeans, vegetable systems or Christmas trees.

The 2017 samples included Palmer amaranth (1), Powell amaranth (5), redroot pigweed (9), common waterhemp (4), common ragweed (9), giant ragweed (3), common lambsquarters (3) and horseweed/marestail (16). Each sample received was tested for resistance to five or seven herbicide Sites of Action. In light of the availability of the Roundup Ready 2 Xtend® soybeans in 2017, dicamba was added to many of the species screens.

The screening results showed weeds previously known to be resistant in Michigan spread to a few new counties (see listing below). There was one new occurrence of resistance. A Christmas tree grower in Montcalm County reported difficulty controlling common ragweed with clopyralid. MSUE Educator Jill O’Donnell and weed control specialist Bernard Zandstra observed the surviving weeds in the field. We have been able to confirm resistance to the synthetic auxin herbicide, clopyralid (Stinger), in common ragweed in Montcalm County. This is the first report of resistance to a Group 4 herbicide in common ragweed worldwide. This population is not cross-resistant with dicamba (also G4) and work is currently on-going to examine any cross-resistance with other G4 herbicides. Results will be made available upon the completion of these studies through peer-reviewed publication, MSU Extension News and the International Survey of Herbicide Resistant Weeds.

A cumulative map and listing of confirmed herbicide resistant weeds by Michigan county is available on the Diagnostic Services website and has been updated to include the 2017 screenings (Figure 1).

Figure 1. Number of herbicide-resistant weed species in Michigan by county. 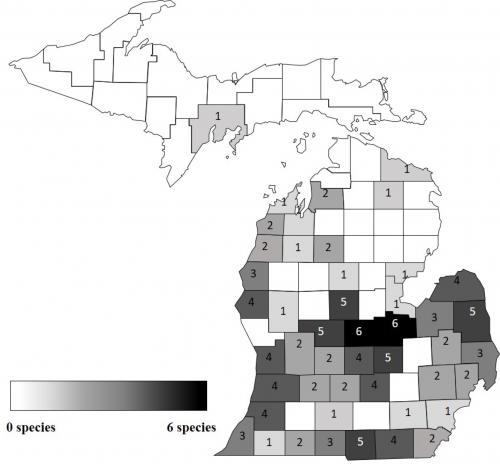 Herbicide resistance testing will again be available in fall 2018, with all submissions due by mid-November. Please view “Tips for collecting weed seeds: Ensure your resistance sample gets tested” or “How to submit a sample to MSU Diagnostic Services” in the back of the “2018 Weed Control Guide for Field Crops” (E-434) for more information on submitting a sample. If you have any questions regarding the 2017 results or future sample submissions, please contact Erin Hill (hiller12@msu.edu) for more information.

New county locations and/or incidents of resistance confirmed from 2017:

*G# refers to the herbicide site of action group