European brown rot blossom blight and shoot collapse symptoms have been observed in northwest Michigan orchards. Photos of symptoms and an analysis of conditions leading up to this infection are provided.

We have observed brown rot blossom blight symptoms in Montmorency tart cherry blocks in several areas of northwest Michigan. Symptoms can be extremely severe in some cases with more than 80 percent crop loss observed in affected blocks. In other cases, pockets of trees were observed in orchards with up to 100 percent spurs blighted on affected trees. Blighted shoot samples from six orchards (25 to 40 samples per orchard) were collected on June 5, 2013, and examined in the Sundin tree fruit pathology laboratory at Michigan State University. Fungal pathogen isolates were obtained in pure culture from the samples and identified using genetic testing. The pathogen identified from these samples was Monilinia laxa, causal agent of European brown rot. 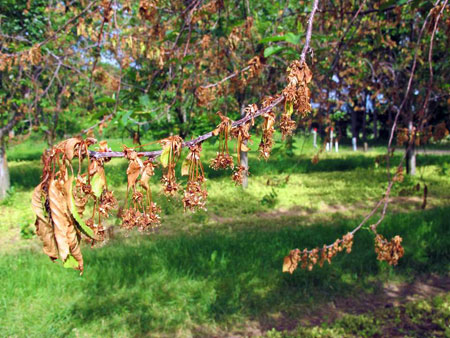 Some of the initial disease symptoms observed on Montmorency in 2013 only included blossom blight (Photo 2), and shoots seemed unaffected as leaves appeared healthy (Photo 3). Isolates recovered from these early blossom blight samples were identified as Monilinia laxa. Upon return to affected orchards 12 days later, we observed extensive shoot collapse, although collapse was not observed in all infected shoots (Photos 4-5). 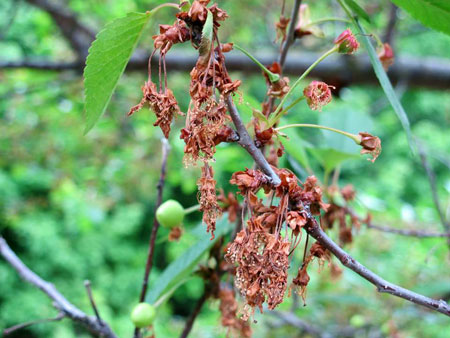 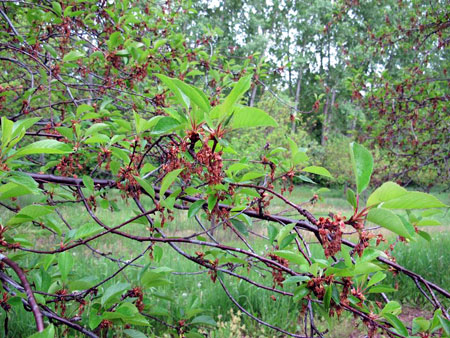 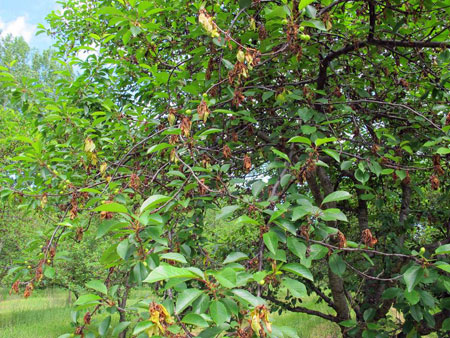 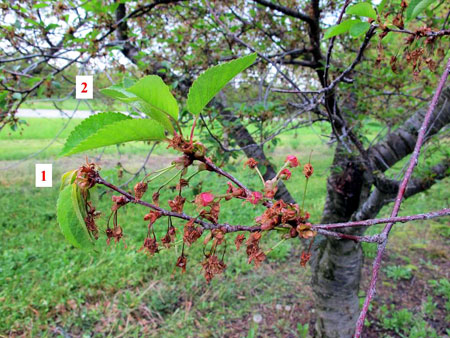 Photo 5. Developing European brown rot symptoms observed on
June 17, 2013, in Montmorency tart cherry. Note blossom blight
symptoms on both shoots 1 and 2, while only the lower shoot 1
is beginning to show the wilt symptom.

We know that Montmorency tart cherries are less susceptible to European brown rot than Balaton, and it was unusual to see such extensive symptoms on Montmorency this year. However, environmental conditions in northwest Michigan were conducive to European brown rot infection. A long, 17-hour wetting period (0.61 inches of rain measured on May 10 at the Northwest Michigan Horticultural Research Center) occurred at the first open Montmorency flowers.

In addition, the average relative humidities stayed above 86 percent for a 48-hour period. Measurable rainfall occurred on four consecutive days (May 9-12) with temperatures in the 30s and 40s. There was also a possibility that frost injury contributed to European brown rot infection, as low temperatures of 32, 32.3 and 31.7 were observed at the NWMHRC from May 10-12. At one orchard site, we only observed European brown rot symptoms on trees located in a low area within the orchard. 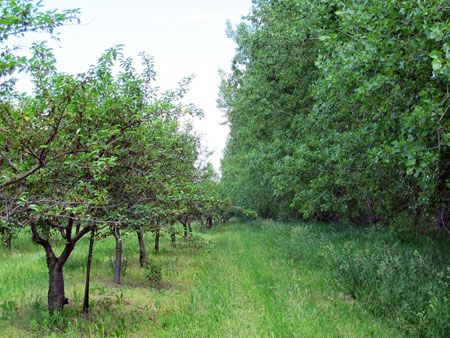 Many affected orchards were also in locations near Lake Michigan where cool, wet weather is more common and often associated with fog; we think the proximity of these orchards near the water may have exacerbated the European brown rot infection. 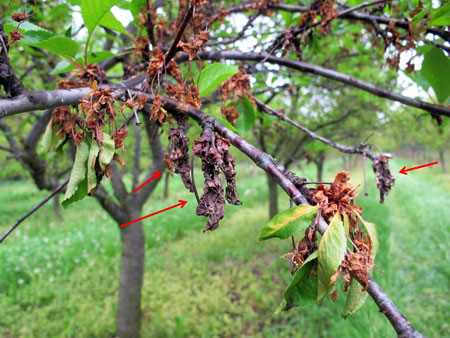 Photo 7. European brown rot symptoms on Montmorency tart
cherry in 2013. Arrows point to infected spurs from the previous
season that serve as overwintering sites of the pathogen and
sites of sporulation in the current season.