A cold start to the 2014 growing season for field crops

Growing degree day accumulations, which are important to both plant and insect pest development, look very similar to 2011 and 2013.

Talk to any person in Southwest Michigan and they will all say that they are thoroughly ready for warmer temperatures. It has been a winter to remember according to Michigan State University Extension, but looking at the month of March from the perspective of a plant or an insect, that is, from the growing degree day (GDD) standpoint, the temperature accumulations for March look very similar to what we saw both in 2011 and 2013.

If you consider that we normally add around five GDDs base 42 per day over the next 10 days and two GDDs base 50 per day for the same period in Southwest Michigan, we are nine to 10 days behind the “normal” year. We are so far behind the development we saw in the record year of 2012. So what does this mean for field crop producers this growing season?

Wheat and alfalfa, the two field crops that are already in the ground, are going to progress at around 10 days behind normal this year so far. The good news is that the insect pests that overwinter here, especially alfalfa weevils, will also be behind about the same amount of time. Snow cover generally is expected to have helped these crops. However, damage may have occurred where water and ice accumulated for extended periods. The impact of the harsh winter weather on fruit crops in Southwest Michigan may have been substantially different.

For corn and soybean producers, the cold start means that winter annual weed growth, which was somewhat slowed already from the cold fall, will continue to grow at a reduced pace. This could be beneficial for reducing the egglaying habitat for black cutworm moths, a pest that comes to Michigan each spring on the warm air currents. Despite the cold temperatures, many of the field crop insect pests that overwinter in the field edges should have been able to survive quite well under the deep, insulated blanket of snow that many areas maintained from December through March.

What is more important to field crop growers than the cold and snow packed conditions in March is what the weather is going to do over the next couple of weeks. To rapidly get back on track, we need to see the soils warm up and dry out. While most fields lost the last of the snow pack this last weekend (March 31), the fields are still saturated. This puts the prospect of completing field work in the near future in serious doubt.

The 6-10 and 8-14 day outlooks from NOAA show below normal temperatures expected for both time periods with above normal precipitation totals anticipated, especially for the later part of the forecast period. You can check out the current near term outlooks from NOAA by clicking on the highlighted links. 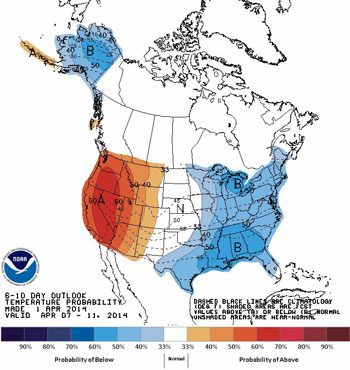 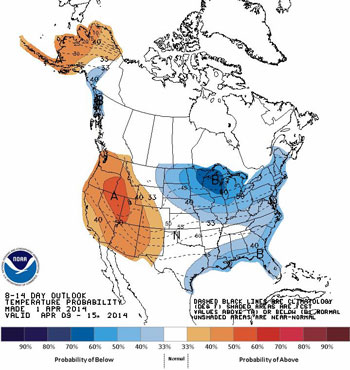 The 6-10 and 8-14 day outlooks show below normal temperatures. Photos courtesy of the National Weather Service. 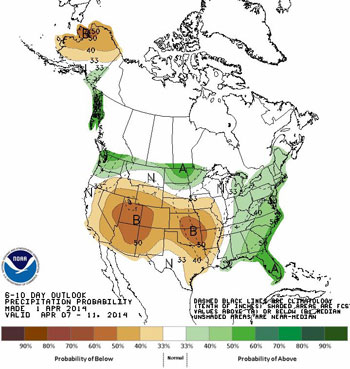 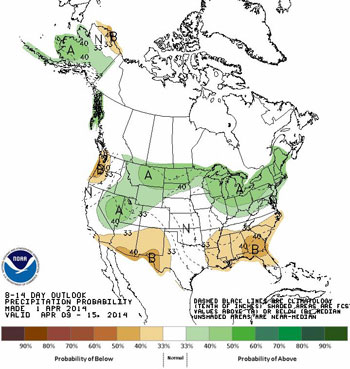 The 6-10 and 8-14 day outlooks show above normal precipitation totals. Photos courtesy of the National Weather Service.

The two Michigan field crops that are the most likely to be impacted by continued cold and wet weather are sugarbeets and potatoes. These crops are cold-tolerant and greatly benefit from field preparations being completed in late March. With cold and wet conditions remaining in the near term forecast, planting delays for these important Michigan crops looks to be a real possibility. Also, expect a slower start for alfalfa and pasture growth which may mean further use of hay and other feed sources for at least a couple of weeks. Remember, weather can change rapidly and we can easily recover from cold, wet conditions with a few clear, hot and windy days.

Do you want to know more about how to access weather information from MSU in your area? MSU’s Enviro-weather is made up of a network of over 80 weather stations that can help you better predict crop growth and manage pests on your farm. To learn more, visit the MSU Enviro-weather website today.