Add aphids to the list of emerging pests for this season

Aphids are small, soft-bodied insects with long, slender mouth parts that they use to pierce stems, leaves, and other plant parts and suck out plant fluids. There are 1,400 species of aphids and their close relatives the adelgids and phylloxerans in the United States and Canada. Many are serious plant pests not only because of their feeding, but also because they transmit plant diseases. Almost every plant has one or more species of aphid that feeds on it. Many aphids are host specific and feed only on a single type of plant while others feed on a wide range of plants. Aphids can be found feeding on roots as well as aerial portions of the host. Some are gall makers. Many have complicated life cycles that require multiple host plants and migrating winged forms.

Aphids come in a variety of colors including red, green, black and yellow. Some are called woolly aphids because they are covered in waxy strands. All are small, slow moving pear-shaped insects with long legs and antennae. Most species have a pair of tailpipe-like structures called cornicles sticking out of their backs near the hind end of their bodies. Aphids are the only insects to have cornicles. Although you can find single aphids on a plant, most seem to prefer the company of others and feed in dense colonies. Aphids produce many generations a year and most generations are produced asexually with adult females giving birth to live offspring. When the weather is warm, many species of aphids can develop from newborn nymph to reproducing adult in seven to eight days. Because each adult aphid can produce up to 80 offspring in a matter of a week, aphid populations can increase quickly.

Most host plants can tolerate low to moderate numbers of leaf-feeding aphids. However, large populations cause curling, yellowing and distortion of leaves and stunting of shoots. Many create a mess while feeding by producing large quantities of a sticky fluid known as honeydew, which is often colonized by black sooty mold fungus. Although aphids seldom kill a mature plant, the damage and unsightly honeydew they generate sometimes warrant control measures. 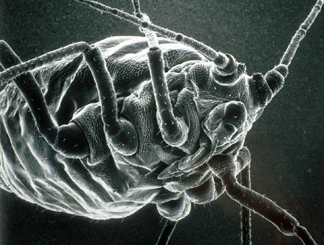 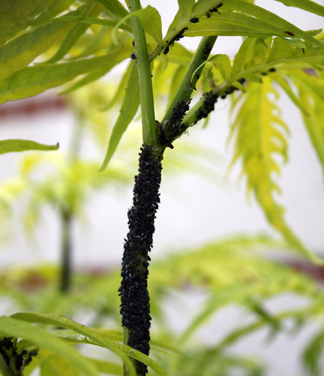 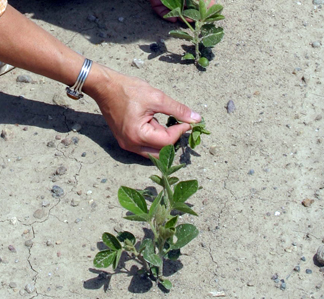 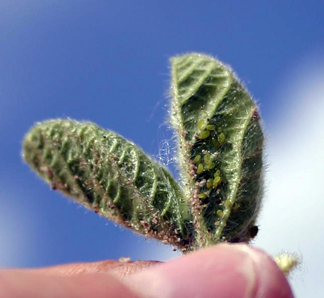 A close up of soybean aphids on a soybean leaf.
Photo credit: C. Difonzo, MSU Entomology. 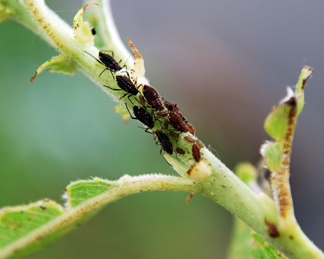 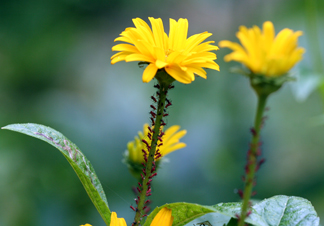 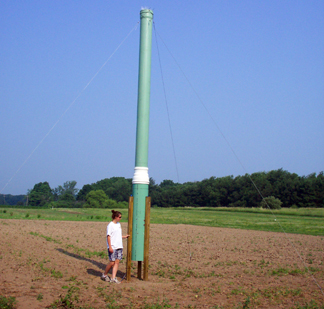 This is an aphid suction trap that Chris has set
up at the Kellogg Biological Station to monitor
winged aphid populations.
Photo credit: C. Difonzo, MSU Entomology.

The Do’s and Don’ts of handling and applying pesticides