After visiting several smaller acreage tomato growers in western Mecosta County last week, it became clear that the 2009 epidemic of late blight was extraordinary. All fields visited had late blight. The symptoms ranged from about 5 percent of the foliage and 1 percent of the fruits to 100 percent of the foliage and fruits infected. Clearly, this epidemic was beyond the experience of any of these growers who were largely stunned and certainly one of the worst I had ever experienced. In order to document this epidemic, I recorded some video footage and posted it on YouTube. In addition, a flier was prepared for distribution in these communities to guide these growers on some actions they could take to reduce the impact of this disease both for themselves and their neighbors.

The genotype of Phytophthora infestans has now been typed as US-14; this is not new to Michigan but has only been isolated from potato crops on a few occasions since 1995. In general, US-14 is less aggressive on potato foliage than US-8 and it has been noted that the stem lesions it causes on tomatoes do not appear to have penetrated to the vascular tissue thus not causing a wilt. The epidemiological implications of this trait are multifold: the plant does not die and lesions continue to sporulate thus perpetuating the epidemic; new leaves and fruits develop, which gives the grower hope that the disease is transient; the new growth and fruits become infected (without crop protection) thus continuing the epidemic.

In potato crops, it has been estimated at 1% foliar late blight lesions across 1 Acre will produce about 10 billion spores over a 24-hour period. The impact to potato growers in Michigan is clear and we estimate that many growers with crops going in to long-term storage will spend up to $350/A in crop protection products alone (not including application costs). Even such intense crop protection efforts do not guarantee late blight-free storage as spores can still deposit in fields after vines have been desiccated. US-14 is a potent pathogen on potato tubers. Sporangia can move passively in soil water to the tubers and infect through immature tuber skin and swollen lenticels. Potato growers intending to store crops in 2009 will be well advised to apply storage protectants at bin loading. Products known to be effective include Phostrol 53.6 SC (1.28 fl oz/cwt tubers) and Oxidate 27SC (0.125 fl oz/cwt tubers) in 0.2-pint water/cwt (4 pt/ton) applied as tubers are loaded into bins. Like foliar crops, potato storages need to be “scouted” regularly paying special attention to depressions in the surface of piles and odors such as ammoniac-odors. Bins should be loaded when tubers have pulp temperatures of about 60 – 70oF and avoid large fluctuations in tuber pulp temperature when bins are loaded over a period that spans evenings and mornings as tuber temperatures can differ by as much as 20oF between night and morning. These temperature discrepancies result in condensation of water between layers that are conducive for rot development. 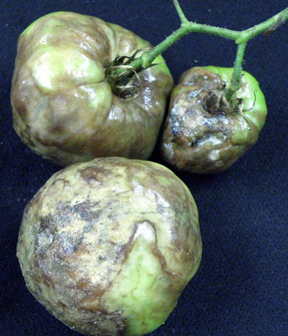