The distinct lack of aflatoxin in Michigan corn is a positive note at the end of a difficult season.

Editor's note: Additional information has been added on 10/17/12 to the last paragraph of this article.

Despite early concern, very little aflatoxin has been detected in Michigan’s new crop of corn. This is good news for growers who are already struggling with low corn yields, shattered soybeans and pending insurance claims.

Aflatoxins are liver poisons (hepatotoxins) produced by fungi in the genus Aspergillus. They are toxic to all organisms that consume grain, though ruminants such as cattle can tolerate higher concentrations than monogastric species (swine, humans, etc.) or poultry. Aspergillus fungi often colonize filling corn kernels when late summer weather is hot and dry, eventually causing ear mold or ear rot. The 2012 season produced ideal conditions for infection, leading the USDA to suggest pre-harvest testing of drought-damaged crops across the Corn Belt.

This year’s loads of corn grain will also be tested when they reach the elevator. Two different assays are commonly used. Samples are first viewed under a black light. An Aspergillus byproduct called kojic acid fluoresces, glowing a blue-greenish gold under the short-wave ultraviolet light. However, the presence of kojic acid does not necessarily indicate high concentrations of aflatoxin. A second test can confirm the problem by detecting distinct aflatoxin proteins in ground samples.

As of October 10, some of Michigan’s largest grain buyers, The Andersons Grain Group and Michigan Agricultural Commodities, had yet to detect aflatoxin above the standard 20 ppb (parts per billion) threshold. That said, growers still need to be vigilant in scouting for Aspergillus ear rot and managing potentially contaminated grain.

The driest areas of a field should be targeted in scouting prior to harvest. Aspergillus rot most often appears as a powdery, olive-green mold toward the tip of the ear. If ear rot is detected in an insured crop, growers should contact their insurance agent before the crop is harvested, stored or delivered for sale to protect their ability to make a quality-loss claim. The insurance agent will collect samples from the crop and submit them to a federally approved facility for testing. 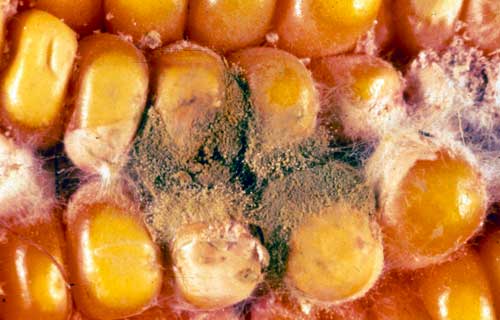 Uninsured growers can also submit samples for testing independently to inform their decision-making and head-off potential rejection at the elevator. Grain testing positive for aflatoxin above the 20 ppb threshold, but below 301 ppb, may still be used for livestock feed according to the U.S. Food and Drug Administration guidelines shown in Table 1. When the affected crop is harvested, clearances in combine cylinders and rotors should be adjusted to limit grain damage. Storage of affected grain is not recommended. However, if the crop must be stored, running it through a grain cleaner first will improve air movement in the bin and minimize aflatoxin by removing susceptible cracked kernals. Drying air temperatures should be above 120 degrees Fahrenheit and the grain dried more than normal to a final moisture level below 13 percent.