Current agricultural prices are having detrimental economic and psychological effects. Producers have made adjustments in a number of ways, but when this situation will change in their favor is unclear.

What determines an item’s sales price is usually based on cost of material, labor, overhead and other inputs. Pricing may also be influenced by what consumers are willing to pay. However, no item can be priced for very long below what it costs to bring it to market, otherwise the producer will go out of business. Farm gate agricultural pricing does not work this way. Generally, someone else tells the producer what they will receive. Agricultural producers have little control over most of their input costs but their suppliers are able to raise prices as their input costs increase. This creates an ever-narrowing profit margin for farmers.

This approach keeps food prices low and over the years has helped reduce what percent of the U.S. family income goes toward their total grocery bill (Fig. 1). However, it has had significant detrimental effects to agricultural producers. 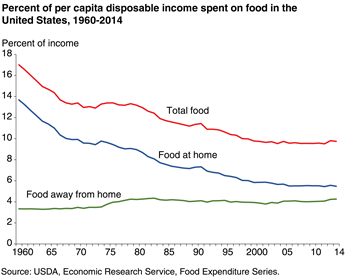 Figure 1. Percent of per capita disposable income spent on food in the United States, 1960-2014.

Inflation-adjusted prices for most agricultural goods have been in a downward trend for at least the past 40 years (Fig. 2) while grower input costs in the form of equipment, labor, supplies, regulatory compliance, etc. have been on an upward trend (Fig. 3). These trends have placed significant economic and psychological pressure on farmers and their families. 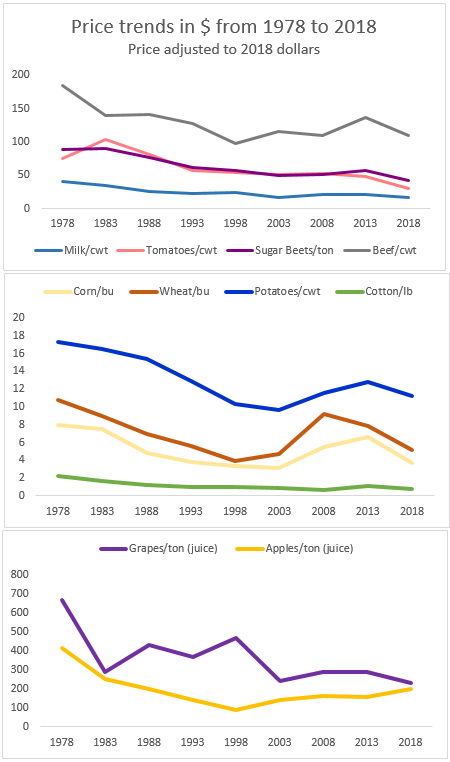 Figure 2. Price trends from 1978 to 2018 of nine agricultural commodities. Prices adjusted to 2018 dollars. 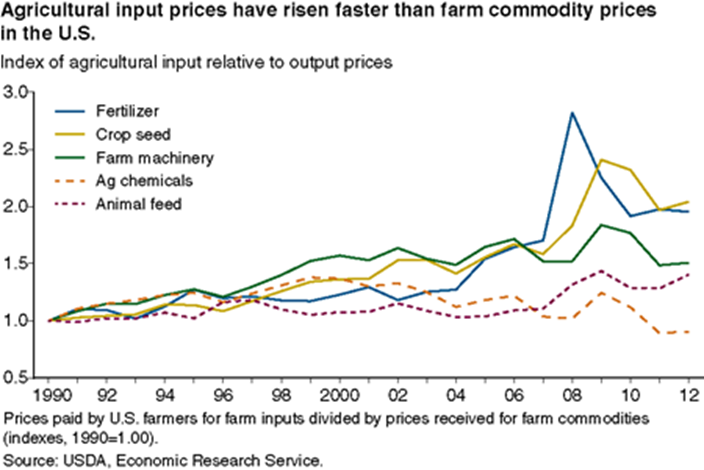 Decreasing prices and increasing costs have left agricultural producers with few alternatives. Many have gone out of business and been absorbed by larger farms or the property sold for development. Many of these farms have been in their family for generations and even though going out of business may have been the best thing to do, it still brings feelings of failure and discouragement. Since the 1940s, the number of farms in the United States has decreased while average farm size has increased (Fig. 4). Large farms have the advantage of the economy of scale and therefore can more efficiently use labor, equipment, spread regulatory costs and others. 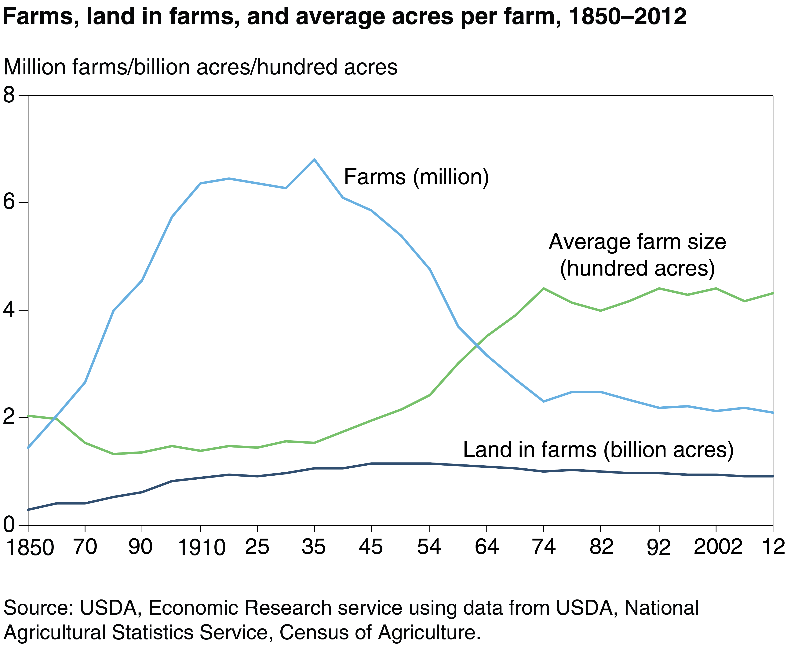 Some farmers have dealt with changing economics by selling products directly to consumers through farmers markets or on-farm markets. This marketing strategy connects farmers directly to consumers, eliminating brokers, distributors and others between the producer and consumer. This allows farmers to have more control over pricing and receive a greater share of the market value. Some have also taken their raw products and added extra value through additional processing into jams, jellies, cider, wine, pickles and other products. Others have opened their farms for You-Pick and other on-farm activities—not only selling a product but an experience, many consumers eagerly seek.

Another way farm producers have adjusted to decreasing prices is the quick adoption of new technologies. Land-grant universities such as Michigan State University have had robust agricultural research and Extension programs since the early 1900s. Private industry has also played an important role in making farmers more efficient through development of equipment, improved genetics, fertilizer and pest control products. Often working together, universities and industry have had profound impact on increasing production. So much so, that less than 2 percent of the population in the United States now claim “agriculture” as their primary occupation. In 1920, it was 27 percent, and in 1820, it was over 70 percent.

Often working in conjunction, improvements have been made in automation, plant spacing, animal care, new and bigger equipment, fertilizer, irrigation, plant and animal genetics, and pest control. For animals, the combined effects of improved techniques is seen in how much milk production per cow has increased in a relatively short time (Fig. 5). Most recently for plants, plant scientists have been able to combine pest control and genetics with the introduction of genetically modified organisms (GMOs) in some crop species. The effect of these improvements in plants is seen in the change in average per acre yield of corn (Fig. 6). 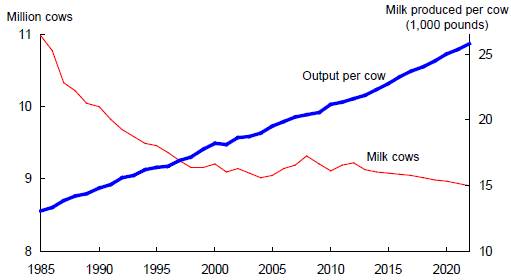 Figure 5. Average milk production per cow and number of cows 1985 through 2020 (estimate). 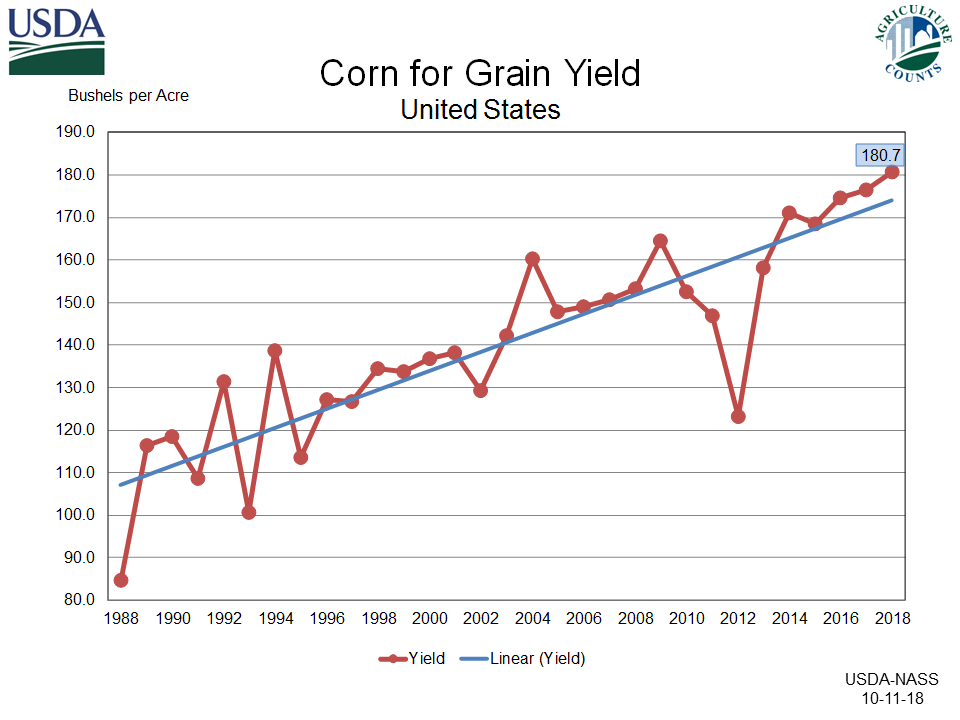 How and when these economic trends will change is unclear. The agricultural industry still works off supply and demand pricing and producers have experienced previous high and low price cycles. Part of the problem is that neither supply nor consumer preference can be well controlled or predicted when it comes to many items in our food supply. Many agricultural products are highly perishable, costly to store, are easily influenced by weather and many are long-lived perennial crops whose total annual production potential is not easy to quickly adjust. All these factors result in producers taking great yearly production risks with many planting crops without having a good idea on what they will receive for their product.

Production of many crops is already highly mechanized. However, further advancement may be possible with recent robotic technology that could reduce labor costs in historically hand-harvested crops. New pest control methods will be developed, as will equipment, production practices and new genetics and genetic procedures. If these new developments offer a decrease in input costs, producers will quickly adopt them, keeping consumer prices low, while helping farmers stay competitive.