As temperatures improve and green up continues, alfalfa plants can be evaluated for winterkill.

The long, cold, snowy winter of 2013–14 continues to have ripple effects on the perennial alfalfa crop in many parts of Michigan. Early reports of alfalfa fields that were slow coming out of dormancy are turning into reports of winterkill throughout Michigan and especially in the Thumb. Plants that showed winter injury and had only small stem growth in late April are now showing growth, but will continue to lag behind throughout the spring until first cutting occurs.

The anticipated reduction in alfalfa yields for 2014 plus the below average growing seasons in 2012 and 2013, along with increased feeding rates during the past winter, raise concerns about having enough forage to last through next year’s winter feeding season. Producers should carefully assess their forage needs and consider the use of alternative forages to offset alfalfa losses if they anticipate a shortage of feed.

As Michigan producers assess the amount of total winterkill in their fields, estimates range from 35-40 percent in areas of the Thumb to 20-25 percent in other parts of Michigan, while some areas escaped significant injury. Potential causes for the variation in winter survival vary from field to field and region to region (see photos). 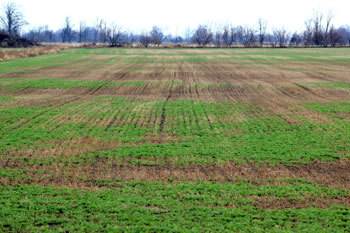 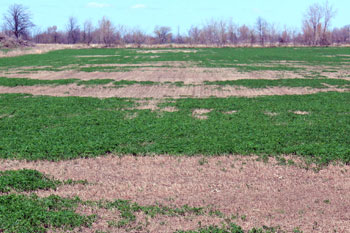 Areas of winterkill in an alfalfa field, 11-day interval.

The timing of last cutting taken in the previous fall matters! In the Thumb region, damage ranged from a low of 5-10 percent stand in fields that did not receive a fourth cutting, to a 75-80 percent stand loss where a late cutting was taken after Sept. 1 in several locations. Inadequate surface drainage may also have played a role in the injury of many fields. These patterns were also evident in several fields in Central Michigan. Areas that were slightly lower than the rest of the field showed more extensive injury compared to the higher areas of the field, possibly the result of super saturation of the soils that occurred near the time of alfalfa breaking dormancy.

Soil fertility levels are an important factor in winter survival of alfalfa. There is no substitute for a sound fertilizer program based on current soil test results. Many producers reduced amounts of fertilizer applied, especially potash, due to higher fertilizer prices over the last several years. Alfalfa is a big user of potassium (K) and requires 50 pounds of K2O per ton of dry matter forage removed. While many producers start out with adequate levels of K in new seedings, if they fail to continue monitoring fertility levels, K deficiencies will develop. Producers that are considering the use of foliar fertilizers during the summer in hopes to help alfalfa plants overcome winter injury should keep in mind that these products often have very low levels of nutrients and usually do not increase plant survival rates.

Using the right alfalfa variety can also play a key role in determining winter survival. While no variety holds all the desirable traits a producer may want, there has been great progress even in the past few years in developing varieties that are higher yielding, have increased disease resistance, and have increased winter hardiness. See “2013 Michigan Forage Variety Test Report” for more information.

Recommendations for managing damaged alfalfa fields will vary from field to field depending on the level of damage and circumstances. Producers may be able to salvage some production even from heavily damaged fields. Cool season grass such as Italian ryegrass can be spot-seeded with a no-till drill into the damaged areas of the field. This should be done as soon as possible to increase yields.

Attempting to re-seed alfalfa into an existing alfalfa field is risky and is not recommended by Michigan State University Extension due to alfalfa autotoxicity. Established alfalfa plants produce a toxin that prevents new seedlings from becoming established and so re-seeding barren areas or interseeding thin stands with alfalfa are typically unsuccessful.

Producers will soon be faced with the decision of when to cut their injured alfalfa fields. Recommendations are to wait for the late growing plants to get to the mid-bud stage before harvesting, and then allow the field to reach over 10 percent blossom before harvesting for either second or third cutting. This will allow the stressed plants a chance to replenish already depleted carbohydrate root reserves. The dilemma is that producers may need the feed and decide to cut early. If they cut according to the earliest maturing plants, they will sacrifice yield for the rest of the year and the life of the stand because more plants will be lost. It’s always a balancing act between having enough fiber for good rumen digestion, cutting for quality, and getting the highest yield by waiting for more growth.

In summary, remember that injured alfalfa will need time to recover if it has not been winterkilled and needs to be given extra care for increased winter survival during the coming months.