Alfalfa weevil threshold damage levels are low, however fields should be examined for signs of tip feeding from now until the first cutting is harvested.

Alfalfa weevils are early season pests of alfalfa hay production. The larvae of the insect is a small, greenish caterpillar that has a yellow stripe on its back. The pest overwinters as adults, and adult feeding can be seen on the first warmer days of spring, particularly in protected areas of fields with southern slope exposure. The adults lay eggs in the stems, which begin to hatch around 250 growing degree-days (GDD) base 48 from the time they are laid. Early instar feeding appears as small shot-hole damage on the upper canopy of the plant.

It takes quite a few alfalfa weevils in a field to produce enough damage to warrant treatment with an insecticide, especially when the larvae are small. However, in recent years we seem to be reaching the treatment threshold more often than in the past. Michigan State University Extension field crops entomologist Christina DiFonzo outlined some of the reasons why in her 2009 article, “Alfalfa weevils are making a comeback this spring.”

Treatment thresholds are reached when 40 percent of the plants are showing tip feeding, live larvae are present and you will not be able to harvest within six to seven days. Speeding up harvest is the preferred way with dealing with the pest, if possible, because it saves the cost of the insecticide application and can help preserve biological control organisms. It also helps to protect honey bees, particularly if some of the plants are in bloom. 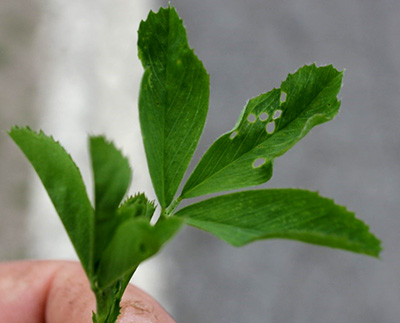 The larvae are small right now, and the fields I have walked have been way under threshold damage levels. However, populations can vary greatly, so fields should be examined for signs of tip feeding from now until the first cutting is harvested. The graph below shows the current and seven-day projected base 41 GDD totals for the MSU Enviro-weather stations in southwest and south central Michigan. Top quality dairy hay harvest usually begins around 750 GDDs. It looks as though we currently are at least 10 days out from this heat accumulation level, even for the most advanced areas of the region. 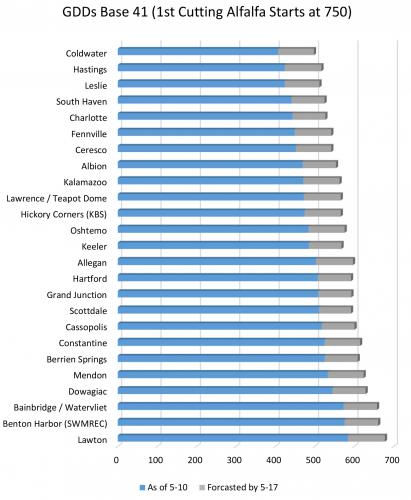 There are a wide variety of insecticides that can be used to control alfalfa weevil. Be sure to look at the pre-harvest interval of the products you are considering to make sure the insecticide you choose will not delay your harvest window.