A slowly degrading quality of life and sense of place may not be perceived by those who cannot read the landscape and see the signs.

Over 40,000 exotic species have been introduced to North America since the first Europeans began hauling them over from their home countries. Most of them are so familiar to us that we think they are natives, such as honey bees or earthworms. A small percentage of these species have proven to be trouble-makers and there are more on the horizon.

These alien misfits contribute to changes in habitats that reduce the quality for many native species and can diminish environmental services that we have grown to depend upon, such as clean water. Most people may not be aware of these changes, as these gradually degraded habitats appear normal. It’s tough to recognize something that ought to be there, but is there no longer.

How does a person learn to recognize these plants and animals? What is a particular habitat type “supposed” to look like? To be frank, it takes some work but available resources exist.

One such resource is the Midwest Invasive Species Information Network (MISIN). Many cooperators contribute, and you can, too. Particular species profiles can be looked over. Data can be browsed. Over 250 species are already in the system. New sightings can be reported. A number of tools can be explored. Knowledge is power when it comes to the battle of containing damaging effects of exotic invasive species. 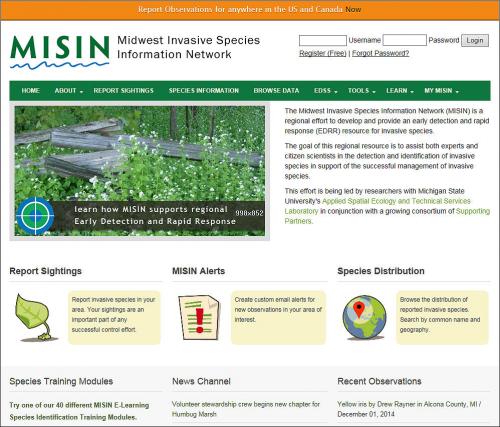 The MISIN website offers a range of resources about exotic species.

The MISIN database is under continual update and some species lack for complete information. The MISIN tool is a work in progress. Suggestions are welcome.

The number of exotic invasive species that affect forest resources are fewer than in many vegetation types. However, there are some important ones currently in our forests and some rather frightening ones on the horizon. Several new infestations have been successfully eradicated and monitoring programs search for new ones. Having lots of eyes looking in the woods is a key to early detection. In turn, early detection is a key to eradication.

While most definitions of “invasive” include species from geographically different places (other continents or other places in North America), some of our native species can grow invasive when ecosystems become imbalanced. The best example might be white-tailed deer, but there are others. 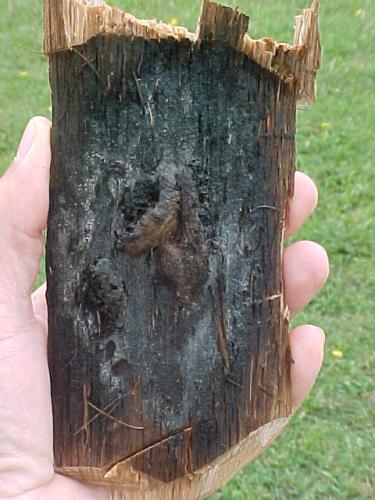 Cracks in recently killed oak can be opened to reveal spore mats and pressure pads, diagnostic for oak wilt.

Abundant populations of deer have significantly changed the ecologies of many Lake States forests, sometimes threatening the existence of the future forest. These changes have had measurable impacts on many wildlife populations, such as migratory songbirds that nest in the understory shrubs and young trees. Wisconsin research shows that deer, alone, can account for 40 percent of observed forest changes in composition and diversity.

According to Michigan State University Extension, invasive species are having an increasing negative impact on our native habitats. However, the context of a larger picture lends a better understanding of how our forests, wetlands and other habitats are faring. Other pressures exerting change include urban sprawl, development of rural areas, increasing recreation, climate change, lack of management, loss of forest industries, ownership parcelization and others.

Many of these pressures work interactively with each other. Sometimes the “elephant in closet” is overlooked due to popular funding for one factor over another. However, the role of invasive species is becoming better understood and better funded. Yet, the challenges remain greater than the resources to address them. Focusing on early detection and rapid response has resulted in successful eradications. Many eyes in the woods can make this happen more often.

Nobody ever said that managing natural resources is easy. In fact, I suspect most managers would say the road is getting rougher.

Keep your woods healthy for tomorrow