Impatiens is one of the top annual plants because of its vast selection of vibrant colors, suitability to an array of soil types, textures and, lastly, its ability to thrive in shady areas. Michigan greenhouse producers growing annual impatiens (walleriana,), seed propagated, or vegetative double impatiens (“garden impatiens”) are on the alert for impatiens downy mildew. Producers are taking preventive measures against downy mildew from propagation through the time the plants arrive at retail. In Florida, there has been an outbreak of downy mildew infecting impatiens in both greenhouses and landscapes. Initially, this disease causes the plant’s leaves to yellow. As the disease progress, both leaves and flowers drop, leaving unsightly landscape beds.

Landscapers should know the disease symptoms and be scouting all impatiens planting this season. Early detection is important to help prevent the disease from becoming a permanent fixture in landscape beds. It is also important to recall and assess the impatiens beds that you managed last year. How did they appear at the end of the season? If the impatiens appeared robust and healthy through the season, then it is unlikely that they were infected by downy mildew. However, if the impatiens were defoliated early (before a frost) then it could be that downy mildew was the culprit.

Downy mildew in the landscape was found last fall in nearby states. If downy mildew was a problem in certain impatiens plantings last year, then it is possible that downy mildew spores (i.e., mildew seeds) could survive the winter and cause an infection of impatiens walleriana this year. To understand the impatiens downy mildew, Dr. Mary Hausbeck’s article, “Downy mildew on impatiens: disease detected in Florida,” explains the disease and impact to impatiens in the landscape. If you suspect that beds you managed last year had downy mildew, then it would be wise to choose a different plant type to grow there for this season.

If impatiens become diseased while in the landscape, there is a preventive spray program that could be used. Contaminated soil in garden beds must be removed or steamed at 160oF (71oC) for 1 hour or 180oF (82oC) for 30 minutes at the coolest spot. Otherwise, plant an alternate annual plant species that will add color to the landscape beds or add containers to achieve the spectrum of color.

Begonias. These have a mounding habit and are shade and drought-tolerant. They have bronze or green foliage with an assortment of colors and hues of whites, pinks, or reds. 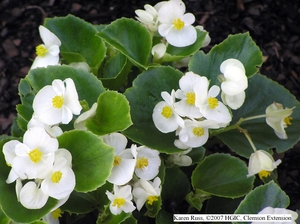 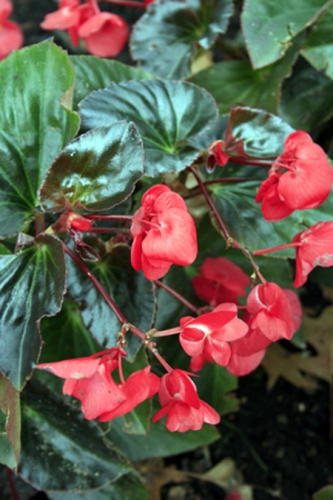 Bronze foliage of a begonia.

Coleus. This plant’s best feature is its colored foliage, not flower. It has a mounding habit with an assortment of colors and unique foliage. 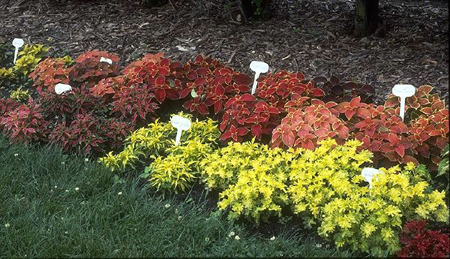 The availability of specialized vegetative propagated plant material is vast. Because of the higher cost for producing these plants, they are not as widely used in mass plantings, but are great for use in container plantings. 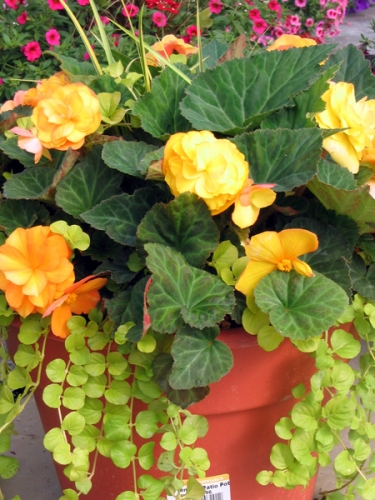 Non-stop begonias and lysimachia in a container.

Best of the best: Top plant performers at the 2015 MSU Trial Gardens – Part 2