American brown rot has the potential to reproduce quickly and a proclivity to reach epidemic levels during years with favorable conditions requiring attentive management and careful scouting.

American brown rot is caused by the ascomycete fungus Monilinia fructicola, and is an important pathogen on cherry (particularly sweet cherry varieties), peach, apricot, nectarine, and plum. The fungus attacks fruit (see Photo 1), blossoms, spurs, and shoots with ideal infection conditions initiating epidemic inoculum levels in as little as 24 hours. Due to its fast reproductive cycle, epidemic levels of disease can appear with very little warning even under intensive scouting. 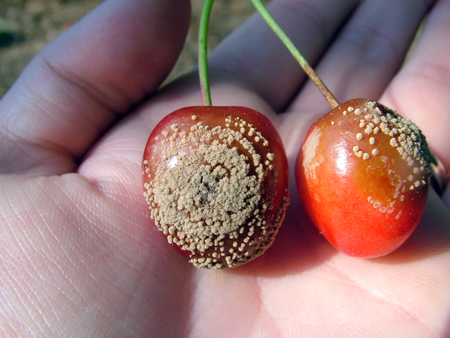 In Michigan, the asexual conidial form of American brown rot accounts for the majority of fruit infections (see Figure 1) with overwintering mummies initiating infections in the current year’s crop. Infection then spreads between fruit with the potential for epidemic levels developing quickly under prime conditions. American brown rot causes fruit rot before and after harvest, greatly reducing the quality and quantity of the yield, particularly in heavily bunching sweet cherry varieties. 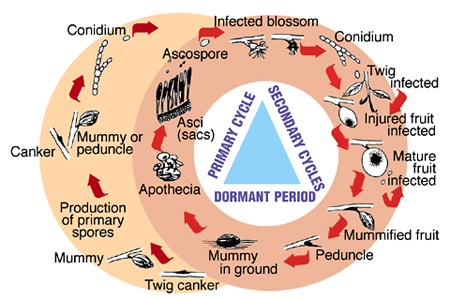 In recent years the management of American brown rot has become more difficult due to population of the pathogen becoming less sensitive to sterol inhibitor fungicides, the primary tool for its management (see the March 31, 2009 MSU Fruit CAT Alert article for more information). Resistance to sterol inhibitor fungicides acts in a quantitative manner, meaning that a fungus with a decreased sensitivity to one rate can be controlled by a higher rate of the same fungicide. The use of higher rates of a sterol inhibitor fungicide acts as a hedge against resistance development. The higher rates are effective against fungal isolates that show decreased sensitivity; controlling these isolates then decreases the chance of further shifting to resistance. With this in mind, a Special Local Need [EPA 24(c)] registration has been granted by the EPA for the use of increased rates of Indar 2F for brown rot control for the 2011 growing season, more information on this label is listed below.

Based on field efficacy trials, the best fungicides for American brown rot control are still the sterol inhibitors Indar and Elite. Pristine and Gem are also rated as providing good control under lower disease pressure and can be utilized as a rotational partner under low pressure conditions. Keep in mind that Rovral may be applied for the spring, blossom-blight application to help limit the number of SI sprays used in a season.

Principals of good American brown rot management include applying full rates and full covers of fungicides; keep the gallons per acre up and tighten spray intervals under high pressure and wet conditions from 10 to 7 days. Removing unsalable cherries from trees at the end of the season can prevent a buildup of inoculate in the coming years and is particularly important in heavily diseased blocks with large trees or heavy clumping varieties. Rotating fungicides between classes as often as possible can help slow the progress of the pathogen to resistance. The most important factor in limiting further shifting in American brown rot populations towards fungicide resistance is to effectively kill the fungus in orchards and limit exposure to SIs. This can be best accomplished as stated above by rotating modes of action and applying lethal rates.

Do not graze livestock in treated areas or feed cover crops grown in treated areas to livestock. Do not apply Indar 2F through any type of irrigation system. Always read and follow the label carefully when applying any pesticide.