A high population of apple flea weevils, an old orchard pest, has been found in a northwest Michigan organic apple orchard.

In the last five years, organic apple growers in the southern portion of Michigan’s Lower Peninsula have observed occasional upsurges of apple flea weevil (Orchestes pallicornis). Apple flea weevil is an old orchard pest that has gone relatively unnoticed or misdiagnosed in conventional and organic orchards in the last few decades. Historical records indicate at least two outbreaks of the weevils in the 20th century, once in the late 1920s and again in the early 1980s. Last week, apple flea weevils were detected in northwest Michigan in an organic apple orchard. High populations of this pest were found in the southern part of the state in 2010 and since then, it continues to be a regular pest in southern and central Michigan organic orchards.

Apple flea weevils emerge in the spring sometime between the green tip and pink stages of apple bud development. Many apples in the northwest region are currently at the pink stage, and will begin opening blossoms soon. Adults that are currently present in orchards will feed on leaves and buds, leaving a characteristic “shot hole” type of damage (Photo 1). Feeding damage at this time can also cause buds and blossoms to abort.

Adults are also mating at this time and the females will begin laying eggs in leaflets as they form. Eggs are typically laid near the main leaf vein and the larvae that hatch from the eggs are leafminers that mine from the main vein toward the leaf’s margin. These larval leafminers form a pupal chamber called a “blister” between the upper and lower leaf surfaces near the leaf margin or edge (Photo 2). The larvae pupate inside of this blister and emerge as adult beetles in June and July. Newly emerged adult weevils feed on leaf tissue before entering diapause in late August or September. Adults overwinter in leaf litter on the orchard floor at the base of trees. 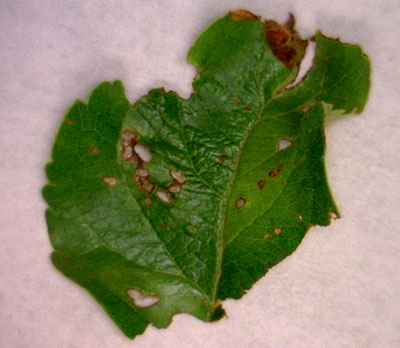 The adult beetles are small (about 3 millimeters long), black weevils with a short snout and club-shaped antennae (Photo 3). The hind legs of the beetle are enlarged at the segment closest to the beetle’s body. These legs are spring-loaded, allowing beetles to jump when disturbed – hence the name “flea beetle.” The beetles will also tuck their appendages close to their body and drop from foliage when disturbed. 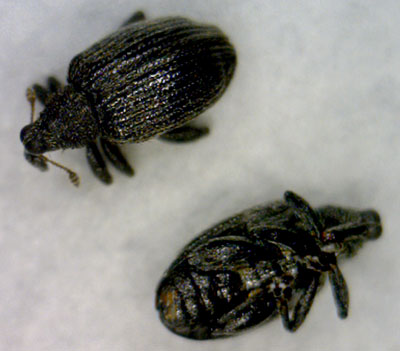 Apple flea weevils made the limelight in 2010 when this pest caused up to 90 percent of fruit loss in some Michigan orchards. Since then, damage has been observed in conventional and organic apple orchards in Michigan. Michigan State University Extension recommends the two best control timings for this pest are between tight cluster and pink to kill adults that emerge, begin feeding and laying eggs in the spring. The key for control is to have enough leaf area present for spray material to contact and provide efficacy against the weevils. Research conducted by the MSU Organic Pest Management Lab has shown that the spinosad insecticide, Entrust, has good activity against apple flea weevils. However, no insecticides are currently labeled for apple flea weevils.

Scouting for blisters will indicate the effectiveness of early control tactics. If necessary, an additional application could target adults that emerge from the blisters in mid-summer. There is one generation of apple flea weevils per season; therefore, intervention this season should reduce populations in the 2016 season.