Are we at increased risk of yield losses due to corn leaf diseases in southwest Michigan in 2012?

What to consider as you weigh whether fungicide applications are necessary in your field this year due to increases in gray leaf spot and northern corn leaf blight.

We have been seeing increased incidence of the corn leaf diseases gray leaf spot and northern corn leaf blight in southwest Michigan corn fields in 2010 and 2011. Gray leaf spot is a fungal disease that is caused by the pathogen Cercospora zeae-maydis. The pathogen does well in years when the average temperatures are above normal (75-85°F), lots of rainfall for extended periods of time and high relative humidity. Initial symptoms of gray leaf spot appear as small, brown to grayish lesions that have a yellow halo around them. The lesions are often contained between leaf veins, giving infected leaf tissue a checked gray rectangular appearance. Lesions can infect significant percentages of leaf tissues. The disease gets a foothold in the later vegetative growth stages and can threaten yields if it becomes established early enough to cause loss of photosynthetic capacity of the upper leaves during grain fill. 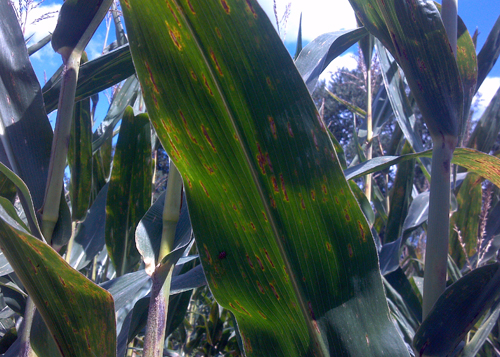 Both of these pathogens were seen in increasing numbers of fields of commercial corn in 2010 and 2011. Some factors that might be influencing the increased incidence include more corn following corn acres in production, which increases the amount of inoculum in fields. Gray leaf spot incidence has most likely been helped by the warm temperatures during 2010 and 2011. Whatever the reason, more fields are approaching treatable thresholds for these diseases during the growing season. Around 40 percent of the plots planted in 2011 at the Cass County Corn Variety Performance Trial showed signs of significant leaf tissue damage from these diseases. Most of the tissue damage appeared to occur later in the season. However, when you look at the weather conditions at the site in 2011, you can see that the weather most conducive to disease development (July 18-30) occurred after tasseling (around July 13), with frequent rainfall events. The concern is that with increasing incidence, we are setting the stage for a significant disease outbreak this coming year if warm, wet conditions happen to occur during the late vegetative growth stage through early grain fill. We are going to be monitoring corn leaf disease development in 2012 at the Cass County MSU Corn Variety Performance Trial funded by a Project GREEEN grant. 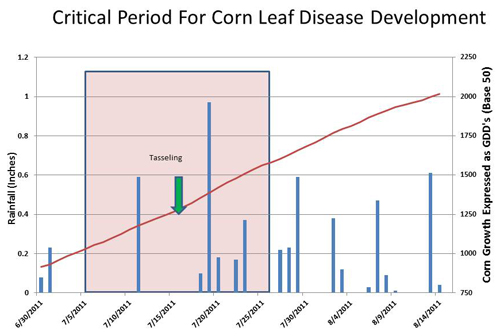 Currently, there aren’t any specific spray thresholds for northern corn leaf blight, but this disease can cause yield loss, particularly when disease is observed on the ear leaf. Consider weather conditions, past disease history, corn debris and economics when deciding whether to spray.

Research that has been conducted by several land grant universities across the Corn Belt have indicated that, in most instances, a single application of a fungicide at tassel emergence (Vt) has been the most profitable. Keep in mind, however, that fungicide applications will only increase yields if the diseases are present at levels to impact yields.