Are we really consuming more services?

There is a widely held belief that American consumers are consuming more services and fewer durable and non-durable goods than in the past, with many commentators stressing that service industries are where we can expect growth in jobs and economic activity.

However, a recent analysis by YiLi Chien, Senior Economist at the St. Louis Federal Reserve Bank questions that belief.

According to Michigan State University Extension, this analysis suggests that while spending on services has increased, that does not mean that services as a share of total consumption has increased because the components have different inflation rates.

Consumer spending is usually broken down into three categories:

The first figure from Dr. Chien’s analysis plots the U.S. consumer spending share in terms of these three categories since 1959. 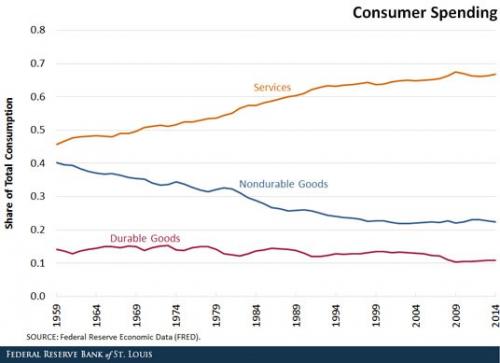 It is clear that spending on services has increased. The spending share of services increased from 46 percent in 1959 to 67 percent in 2014, while the share of nondurable goods dropped from 40 percent to 22 percent during the same period. This illustrates that American consumers have spent relatively more on services than durable and nondurable goods over time. Note that consumer spending on each category still increases over time because of positive economic growth.

However, spending more on services does not necessarily indicate that the real services consumption share is higher. Since, total consumer spending equals the price multiplied by the quantity, consumers might spend more on services simply because of higher prices for services.

To shed light on this issue, Chien adjusted the consumer spending in each category by its associated inflation index. This measures real consumption for each category, which is displayed in the figure below. 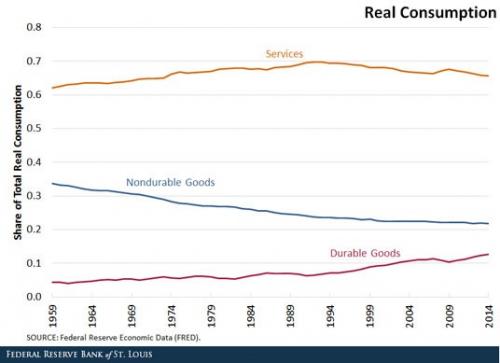 Gifting within your means is okay

Setting a budget is not just a business thing—Part 1

Setting a budget is not just a business thing—Part 2

Give the gift of green through upcycling