Armillaria root rot affects hundreds of plant species throughout Michigan. Learn more about the biology, symptoms and control of this devastating fungus.

Armillaria root rot occurs naturally in the majority of the United States and the Great Lakes region and is caused by a number of fungi in the genus Armillaria. These include A. ostoyae, A. mellea, A. gallica, A. calvescens and A. sinapina, all of which have been documented in the Great Lakes region. Common names for these fungi and their associated disease include honey stumper, honey agaric, oak fungus, honey mushroom, shoestring root rot, mushroom root rot, resin glut, and toadstool disease.

The host range of the fungi is vast with hundreds of vines, shrubs, shade and forest trees, as well as horticultural crops affected. Some of the Great Lakes plants and crops that are susceptible include maple, oak, white pine, red pine, aspen, peach, cherry and potato.

Armillaria root rot eventually girdles and kills host plants. The loss of agricultural crops is most notable on sites where forested land has been cleared and the fungi are already present when the crop is planted. Unfortunately, the Armillaria fungus can remain latent in the soil for many years, making infested land unsuitable for agricultural production of susceptible hosts for many years.

Armillaria root rot overwinters in the same fungal form present during the growing season (rhizomorphs or mycelium) on diseased or decaying plant materials and roots. Armillaria root rot may also overwinter as basidiospores – the sexual spores of the fungi – produced by honey-colored mushrooms that form at the base on infected plants in the fall. The principal method of spread of the fungus is root-to-root through rhizomorphs, or root-like structures, or direct root contact during which mycelium invades healthy roots directly.

Rhizomorphs grow from infected plants or decaying material to healthy trees in the surrounding area. Basidiospores typically colonize decaying materials or compromised host tissue with the subsequent rhizomorphs infecting healthy hosts. Armillaria root rot is capable of attacking healthy hosts, but the greatest mortality occurs in stressed trees. In cultivated settings, infected debris and basidiospores can be spread through cultivation.

Affected plants may exhibit reduced growth, small chlorotic leaves, branch dieback and the slow or abrupt death of the plant. Symptomatic plants may appear random spatially, but over time a pattern of circular expansion often becomes evident. Symptomatic trees have decaying bark at the soil line and on the roots. 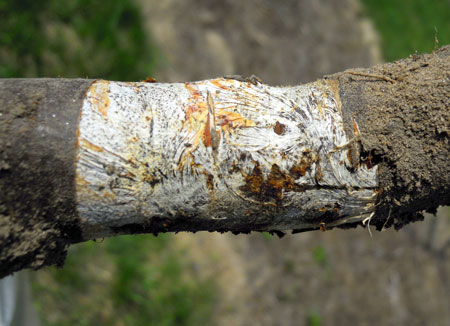 The key diagnostic sign of Armillaria root rot is a white mycelial mat, or spongy fungal sheet, between the bark and wood in the cambial layer. The mycelial fans appear veined and may extend up the trunk of the tree several feet. Rhizomorphs are another distinct sign of Armillaria root rot. Rhizomorphs are brown-black “shoestring” structures, 0.01 inch in diameter with an outer black mycelium and a white core. Rhizomorphs have the same growth pattern as roots and may form under the bark or spread into the soil surrounding the root zone of host plants. 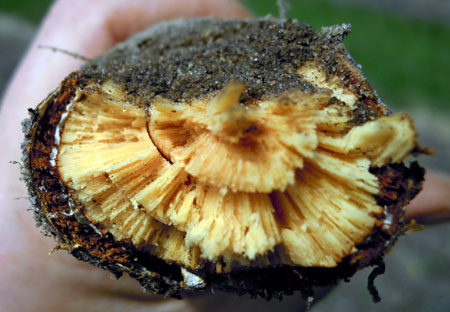 If the cambium has been invaded, resin or gum is often exuded into the soil surrounding the trunk and roots. At the base of dead or dying trees, speckled mushrooms 3 inches tall with 6-inch diameter caps grow in clusters. These mushrooms appear in the fall and have pronounced gills that produce basidiospores.

According to Michigan State University Extension, there is no known control for Armillaria root rot. Control has been attempted via root excavation, trenching and fumigation with little to no effect. Current areas of treatment research include biological control and innate resistance screening of host plants.