One of the longest-running amphibian surveys in the country is celebrating its 20th anniversary, and is providing information that will protect frogs, which include the toads, for future generations. Called the Michigan Frog and Toad Survey, it is manned by an army of volunteers who monitor the animals by listening for their nighttime calls. The survey is coordinated by Lori Sargent, wildlife biologist with the Michigan Department of Natural Resources, and is supported by the Nongame Fish and Wildlife Fund through sales of the wildlife habitat license plate.

Besides noting which frogs live where, the survey helps biologists determine those populations that are doing well and those that aren’t, so they can conduct further studies or take action. Moreover, the data from the Michigan Frog and Toad Survey has been instrumental in current discussions to add one of the state’s 13 frog species – the Fowler’s toad – to its “Special Animals List,” which includes organisms that are endangered, threatened, and of special concern. If it is listed, the Fowler’s toad will become the third frog on the list. The other two protected species are the boreal chorus frog and Blanchard’s cricket frog. 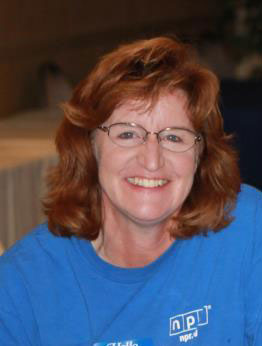 The survey started in 1996 in response to the worldwide recognition among herpetologists and other scientists that the numbers of amphibians, and especially frogs, were decreasing, said survey coordinator Sargent.

“We had never done a statewide assessment of frogs and toads, so we wanted to see how they were doing.  Ours was the second frog and toad survey in the United States,” she said.

The Michigan Frog and Toad Survey works like this: An individual (or a team, sometimes an entire school class) picks out 10 roadside wetland sites at least a half mile apart, visits them three times a year to listen for calling frogs, notes which species are calling, and submits the information to Sargent. In a typical year, volunteers monitor 2,000-2,500 separate sites.

New participants receive a packet of instructions, which includes a CD of frog calls to aid with identification and directions for selecting a route.

“We ask them to set up their route when the frogs aren’t calling, so they don’t bias their choices,” Sargent said.

That’s because it’s important to not only know where frogs are present, but also where they should be, but aren’t. Sargent said that “negative” data can be useful as it raises questions about why frogs aren’t appearing in perfectly good wetland.

Sargent also checks new against existing routes to make sure they don’t overlap. She especially encourages new routes in the eastern U.P. and in the palm of the Mitt (such as Saginaw, Gratiot and Montcalm counties), which are not as well covered as other parts of the state. However, she notes, she welcomes new routes from all parts of the state.

The collected data is valuable, especially in alerting scientists to potential issues, she said.

“The survey acts as a screening project, so we can say, ‘Hey, this species doesn’t look good here. Can a university take up a research project on this?’”

So far, the two decades of data from residents has revealed a few things. While most species have been stable over the 20-year period, the survey data have revealed declines in the numbers of both Fowler’s toads, which are found in certain areas of the Lower Peninsula, and mink frogs, which live in the Upper Peninsula.

“Besides population trends, you can find out a lot of other information from long-term studies, including whether these species go through cycles … or whether climate change is affecting populations,” Sargent said. “Definitely, the more years of data we collect, the better, so we’re hoping to have the survey go on as long as possible.”

For more information about the Michigan Frog and Toad Survey, including signing up for a route, contact Sargent by email at SargentL@michigan.gov or by telephone at (517) 284-6216.