A big storm front from June 8-10 brought in a load of armyworm moths into Michigan. Many locations along Lake Michigan, especially places with bright lights on at night, reported an abundance of light brown moths for several days after the storm. But nobody noticed them more than the fans at Comerica Park during two night games, including the game that Justin Verlander pitched a no-hitter. The problem came from the gulls more than the moths. What happened is that the bright lights at Comerica Park acted as a giant light trap, attracting moths from miles away. After fluttering around the lights, some of the moths settled into the stadium. Moths are a tasty treat for gulls, and they couldn’t resist such a banquet. Hundreds of gulls came to the stadium where the easiest picking seemed to be off the baseball turf.

Kevin Newhouse, an entomologist and technician working in my lab visited Heather Nabozny, head groundskeeper for the Detroit Tigers, to discuss the problem on Monday, June 11. Kevin collected some of the moths and identified them as the armyworm, Pseudaletia unipuncta. Overwintering armyworms complete their spring development in mid-to-southern Indiana, Illinois and other parts of the Midwest at a similar latitude, in late May, pupate and emerge as adult moths in early-to-mid June. Large numbers of these and other related moth species can move large distances with storm fronts. The moths rest during the day and fly at night, and they are very attracted to bright lights. The rest of the story is history now. The gulls were dancing all over Comerica Park snatching up moths during two Tiger night games. 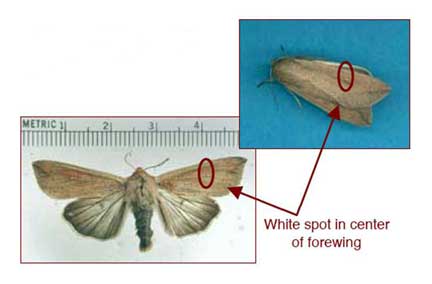