Be on the lookout for Asian chestnut gall wasp

Asian chestnut gall wasp is present in southwest Michigan. Scout carefully and continue to comply with the state quarantine. Importing plant material from states with known infestations is prohibited.

Asian chestnut gall wasp (Dryocosmus kuriphilus), first identified in Michigan in 2015, is now established in several chestnut orchards in southwest Michigan. Research is underway to assess development of the gall wasps and their potential effects on trees or burr production. A tiny parasitoid that was introduced into the U.S. in the 1970s for biological control of Asian chestnut gall wasp is currently feeding on gall wasp larvae in at least some of the affected fields.

Failing to comply with the quarantine will result in penalties for individual growers. Exceptions can be allowed if the nursery of origin is certified as being free from Asian chestnut gall wasp for at least three years by the respective state regulatory agency. Check for an updated quarantine list before ordering materials. Review the complete provisions of the quarantine from the Michigan Department of Agriculture and Rural Development.

Asian chestnut gall wasps are a potentially devastating invasive pest that can infest all species in the genus Castanea, including American chestnut, ornamental species and those planted for nut production. The Asian chestnut gall wasp is native to Asia and was first reported in the United States in 1974. It was observed on Chinese chestnut in Georgia after it was introduced on imported plant material. From Georgia, the geographic range expanded, reaching Virginia in 2001, Ohio in 2002, Kentucky in 2003, Maryland and Pennsylvania in 2006, Connecticut in 2011 and Massachusetts and Ontario in 2012. Asian chestnut gall wasps have continued to spread across eastern North America by natural dispersal (e.g., adult wasp flight) and via human transport of infested plant material. It was confirmed in Michigan in June 2015.

The gall wasp produces one generation per year via asexual reproduction, which means all offspring are females. Trapping data from southwest Michigan confirms adult emergence from early-late July, with peak populations occurring in early July. Adults lay eggs inside buds in early summer and eggs hatch within the bud soon after. After egg hatch, the larvae remain inactive until bud break the following spring, when their feeding induces the formation of galls. During this latent period after egg hatch, the insect is undetectable. Accidental movement of infested plant material, therefore, is a major concern. 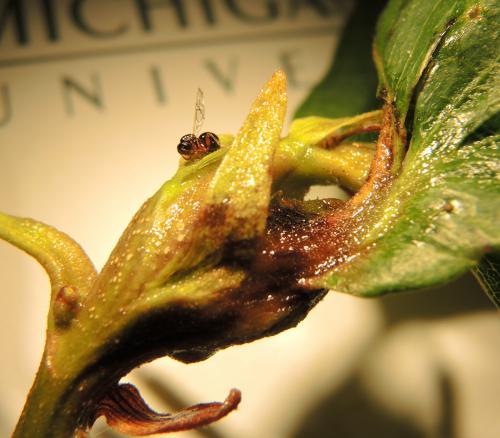 Asian chestnut gall wasp causes globular galls to form on stems, twigs, leaves or petioles on actively growing shoots of all Castanea species. These galls, protect the larvae and pupal stages from desiccation and most natural enemies. Adult wasps emerge from galls in early summer, locate new chestnut shoots and lay eggs that will hatch into the next generation. After the adult wasps emerge, galls become woody and dry out, but can persist on the tree for several years. Galling reduces fruiting and nut yield, suppresses shoot elongation, reduces tree vigor, slows wood production and can even kill trees. Infested shoots do not produce new growth or ﬂowers, thereby reducing or eliminating future nut production.

The easiest way to scout for Asian chestnut gall wasp is to visually inspect trees for galls. Scouting can occur at any time of the year because the galls persist on the tree even after the wasps emerge in early summer. Leaves often remain attached to the galls during the winter, which makes them highly visible at that time.

If you have identified Asian chestnut gall wasp on your farm, please contact Mike Bryan, plant industry specialist, Michigan Department of Agriculture and Rural Development, at 517-284-5648, or Erin Lizotte, MSU Extension, IPM educator at 231-944-6504 or taylo548@msu.edu for management assistance and to assist us in tracking possible movement of Asian chestnut gall wasp. 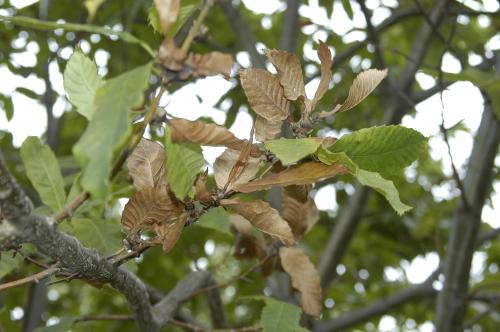 This material is based upon work supported by the USDA NIFA under Award No. 2017-700006-27175. Any opinions, findings, and conclusions or recommendations expressed in this publication are those of the author and do not necessarily reflect the view of the US Department of Agriculture.

Dr. Fulbright’s work is funded in part by MSU’s AgBioResearch.