An update on this new pest of corn, potatoes and alfalfa in southwest Michigan

We recently had a question about Asiatic garden beetle larval feeding in potatoes in Southwest Michigan. The following article describes some of the challenges we have seen from the pest in the region on various crops.

Asiatic Garden Beetle (AGB) is a new invasive species that was first found in Michigan in significant numbers in 2007. The pest came into the state from Indiana, which is just the latest westward expansion of its range from the northeastern United States where it was first found in the 1920’s. Adult Asiatic garden beetles are similar in shape to Japanese beetles, but are somewhat smaller and are an iridescent cinnamon color. In our experience, the larval feeding in potatoes typically causes round to oblong pock marks on the surface of potato tubers about 1/4 - 3/8 of an inch deep. Growers reported seeing an unusual number of white grub larvae on the belts of potato harvest trucks in 2007 and 2008. The pest can impact frying quality in chipping potatoes by causing a darkening near the feeding site. 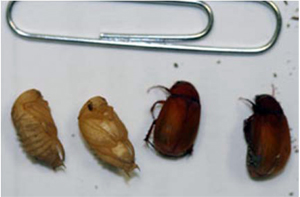 Asiatic garden beetles lay their eggs in lush, shallow-canopied fields (potatoes, soybeans and potentially alfalfa). The eggs hatch, and the larvae begin to feed on roots and tubers. The time frame that we generally see larval feeding in potatoes in southwest Michigan is when the tubers are still in the ground in early September. Once soil temperatures begin to cool off, the larvae move down in the soil profile, and overwinter in the field. When soil temperatures begin to warm up in the spring, these larvae move up and begin feeding on the roots of available plants. This often includes corn and alfalfa seedlings, but might include other crops as well. It is during this period that you are likely to find the larger larvae, which are the easiest to identify. One unique and easy to identify characteristic of the larvae are the bulbous stipe’s (white palps) on their "cheeks," which is very distinctive. 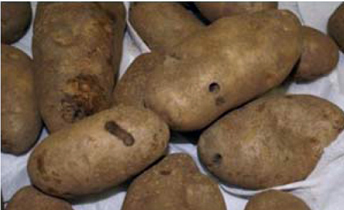 The larvae are very aggressive feeders on root tissues in the spring. The larvae can often be found in mid- to late May near the soil surface, often associated with the roots of chickweed, purple deadnettle and henbit. They can cause extensive root feeding damage to corn seedlings. Symptoms of infestation often show up as declining stand height and population uniformity, which can lead to significant population losses. Symptoms can sometimes be mistaken for sand hill crane feeding damage. Growers often notice the damage when applying side dress nitrogen applications at V6-V8 stage corn. Research conducted in 2008 in St. Joseph County showed that soil insecticide applications or seed treatments of Poncho at the 250 and 1250 rate reduced stand losses and protected yields compared to non-insecticide protected control treatments in corn. Adult AGB numbers seem to have declined after the 2008 growing season. There may be a correlation between their decline and the seed corn industry standard practice of treating all corn seed with an insecticide at the 250 level of since the 2008 growing season. However, we did see at least one field in 2010 near Sturgis that suffered significant stand loss despite seed insecticide treatment at the 250 level. 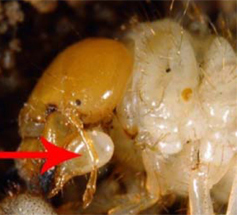 Unfortunately there are not good rescue treatments for white grub infestations. You have to know that the beetles were active in the area during the previous season to be able to make a decision about applying soil insecticides for corn (above the 250 standard level of treatment) or using the 1250 level of seed insecticide treatment. There are even fewer options for other crops. We have been able to catch adult beetles in western bean cutworm traps when we used the pink RV anti-freeze. Since the adults are strongly attracted to bright lights, they often can be monitored in brightly lit ornamental plantings or in the canopies of gas stations during July. 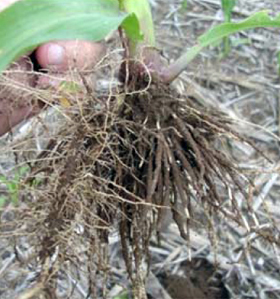 The last evaluation of the range of Asiatic garden beetle infestation in Michigan was conducted in the summer of 2008. Based on various monitoring methods, we estimated the AGB range in Michigan to be Berrien, Cass, St. Joseph, Calhoun, Kalamazoo, and Allegan Counties at that time. We have not seen significant larval feeding symptoms on potato tubers here since 2008, but the potential still exists for challenges from this pest in Southwest Michigan to corn, alfalfa and potato production.