Why Asiatic garden beetle white grubs may be poised to cause yield losses in your southwest Michigan rotated corn fields in 2018.

If you ask about Asiatic garden beetles, most southwest Michigan corn growers will tell you they have never seen them, or maybe they saw just a couple of them buzzing around their lights last summer. However, when we asked about corn stands that seemed to go backwards in terms of plant height uniformity last season, a whole lot more folks raised their hands at Michigan State University Extension winter meetings. Some attributed the challenges to planting depth. Others cited phosphorus deficiencies (purpling corn). Still, others blamed sandhill cranes for missing plants, which is still a very real possibility. However, the real culprit may have been Asiatic garden beetle white grubs.

Asiatic garden beetles are very hard to detect. The adults are nocturnal and often feed, mate and lay eggs during the nighttime hours. They also like to bury themselves under the soil surface during the day. It is likely the beetles move from the corn fields where they emerge to thick, dense canopy crops such as soybeans or potatoes to lay their eggs. Peak emergence in 2017 in southwest Michigan was in the third to early fourth week in June. Eggs hatch in about a week to 10 days.

The larvae—C-shaped white grubs—feed happily on soybean and potato roots. When they are small, even large numbers of the pests are not likely to cause visible above-ground symptoms of damage to these crops. As the larvae get larger—late second or early third instar—they have been found to feed on potato tubers, causing pock mark feeding injury symptoms on the potatoes. These larvae burrow back down in the soil to overwinter. 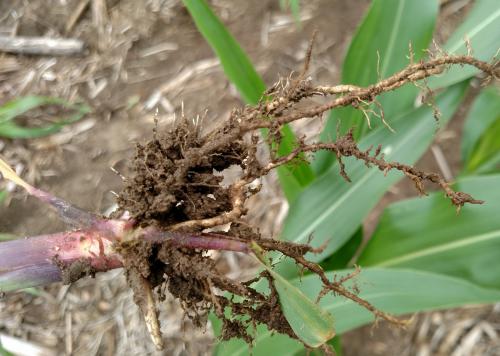 Asiatic garden beetle larval feeding on corn root. This plant, which was located along the edge of an area of high infestation, grew surprisingly well despite heavy feeding. Many younger seedlings in the center of the patches do not survive.

The real challenge from the Asiatic garden beetles occurs the next season. The white grubs move back up towards the surface as the soils begin to warm. These larger grubs are voracious feeders on corn seedling root systems. In early-planted corn where there are high numbers of Asiatic garden beetle white grubs, the plants often appear stunted with a purplish color visible in the leaves followed by tissue browning or seedling death. This usually occurs in irregular-shaped patches in the field. 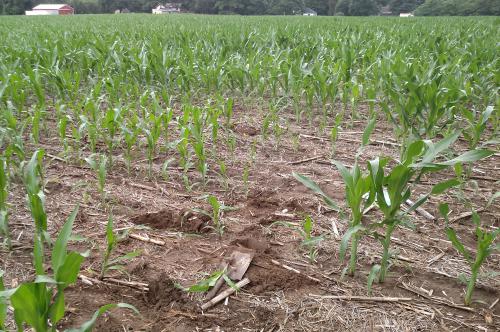 Asiatic garden beetle damage was first noticed in St. Joseph County and northern Indiana in 2007. The acres impacted by Asiatic garden beetles and the number of insects observed in infested fields and around lights have increased in southwest Michigan over the last couple of years. Initially, we found only a few fields across the region with stand reduction, some which were significant enough to force replanting. In 2017, there was a significant increase in damage.

To the south of us, Ohio State University field crop entomologist Kelley Tilmon reported her students were finding increased numbers of Asiatic garden beetles associated with marestail plants. So around the time of pupation, we began scouting for grubs near marestail in southwest Michigan. Early in the season, we found elevated numbers of grubs around marestail. To our surprise, however, as pupation progressed into emergence, we began to find adult beetles around the base of the plants, and we found a lot of them—as many as 40-50 beetles per marestail plant.

The above video shows Asiatic garden beetle adults congregating underground along the base of a marestail plant in a heavily infested corn field in southwest Michigan shortly after emergence on June 28, 2017.  It is unclear if the adult beetles are feeding on the marestail roots, but they seem to be strongly drawn to the species. It may help explain why some fields are prone to more Asiatic garden beetle damage than others. The adults generally seem to move from the fields soon after emergence to lay eggs in nearby soybean fields. The most commonly seen damage occurs in corn fields the following spring from white grub feeding. 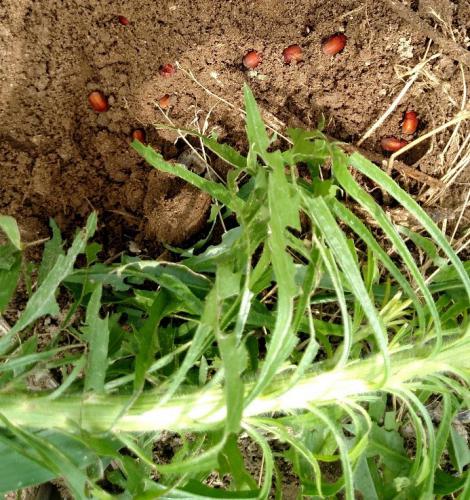 Asiatic garden beetle adults found below the soil near marestail in June 2017.

Marestail may be playing an important role in Asiatic garden beetle expansion. The plant can germinate and grow in fall and spring of the year, potentially providing a “green bridge” for late summer, but perhaps more important, early-spring grub feeding. As herbicide-resistant marestail continues to spread across the region, it may be helping Asiatic garden beetle to become better established.

Observations in corn fields in August 2017 revealed substantial numbers of fields with apparent Asiatic garden beetle emergence holes still visible, thanks to the dry weather during mid- to late summer. Given the stealthy nature of this pest, it is prudent to look for white grubs prior to planting in fields across the southwest region. 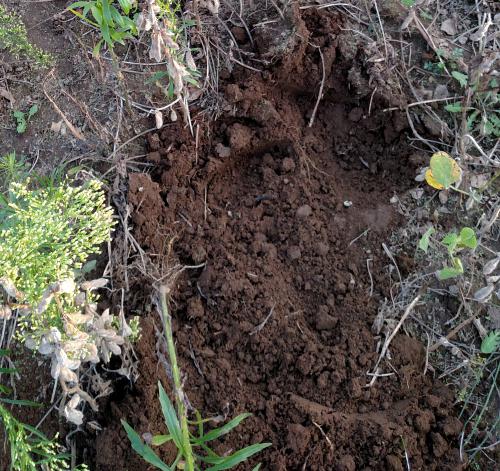 Remember, there are no rescue treatments for white grubs. If you are going to use an insecticide, it has to be applied as either a thick coating seed treatment or soil insecticide at planting. Even with an insecticide, grub control seems to be modest, at best.

Unfortunately, we do not have efficacy trial data with this insect, only anecdotal reports of control successes and failures. We hope to shed more light on this by conducting research funded by the Michigan Corn Growers Association in 2018.

Scouting for white grubs can feel like looking for a needle in a haystack. Once the soil temperatures begin to warm up, the grubs will move towards the soil surface. Before tillage, you may want to look for grubs associated with marestail plants in the field. While we don’t expect the numbers of grubs associated with marestail in spring to be anywhere near as heavy as the adults near marestail plants in late June, we did see elevated numbers of grubs near marestail plants in soybean fields last fall. We also tend to see increased incidence of Asiatic garden beetle damage on or near sandy ridges in fields.

During tillage, take a little break to stretch your legs and look at soil behind the implement, especially when you are conducting field finishing operations. Asiatic garden beetle white grubs are active and will likely be scrambling to move below the soil surface. Their white color makes a good contrast against dark soil, so they may be easier to spot.

Also, watch bird activity. Birds like to search the ground following tillage for earthworms and other insects. If you notice elevated bird activity, it may be worth taking a look to investigate what they are feeding on. Scouting early can help you be aware of the relative number of Asiatic garden beetle grubs you are dealing with.

If you find high levels of white grubs in your fields, call us at 517-353-5328 or the Van Buren County MSU Extension office at 269-657-8213. We are interested in learning more about the range of this pest and conditions in the field that may have contributed to high levels of egglaying in the soybeans during the previous summer.