The MSU vegetable entomology lab conducted an insecticide trial in an experimental asparagus field in Hart, Michigan, this summer. We had nine insecticide treatments including six products and tested three application methods (chemigation through drip irrigation, foliar spray, and in-furrow at planting). The asparagus crowns were planted May 19, 2010 and the drip irrigation system was set up June 10, 2010. The only currently registered insecticides in asparagus as used in this trial are Sevin 4F and Radiant SC. Foliar and drip treatments were applied twice during the season. Sampling was done by visually surveying and recording the number of damaged stems or insect life stages weekly. Drip irrigation was used only for chemigation (i.e. plots were not watered throughout the summer), but plots that were not assigned to chemigation treatment received equal amounts of water through the drip system as those receiving a chemigation treatment. Our results indicated that chemigation was able to suppress immature (eggs and larvae) stages of the asparagus beetle and asparagus miner damage. In general, insecticides applied through the drip irrigation performed the best in insect pest suppression, followed by foliarly applied products. In furrow, at planting applications were the least effective in controlling insect pests.

Since this was the first year of this experiment and the field was established this year, pest pressure in general was at low levels especially early in the season. This is likely because pests need some time to immigrate into and colonize new fields. We will continue to look at the performance of our treatments next season. 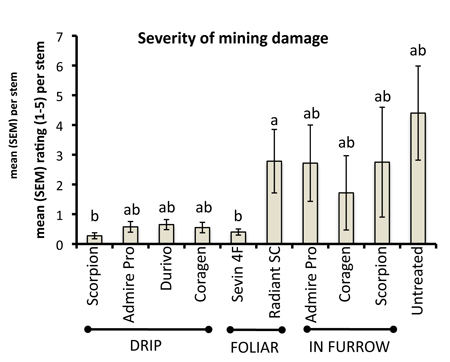 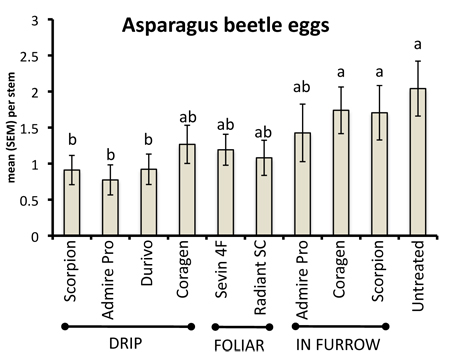 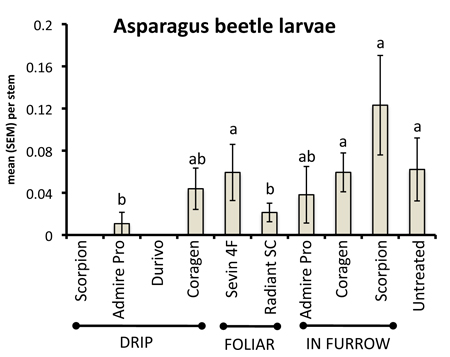