Attack of the 25-foot wild cucumber

An excellent growing season has caused this native vine to grow to new heights.

Wild cucumber, Echinocystis lobata, is a vine native to much of the United States and Canada. It can also be found in many areas of the world. This vine is usually found in places that have adequate soil moisture like close to ponds and streams or bottom land. This year, however, generous rains have encouraged them to grow in more locations and get bigger than many people have reported in other years. Michigan State University Extension educators are receiving calls from people about this mysterious vine. A drive through the countryside will find the vines running over shrubs and climbing high into trees. They are really noticeable now because they are covered in sprays of airy, white flowers. 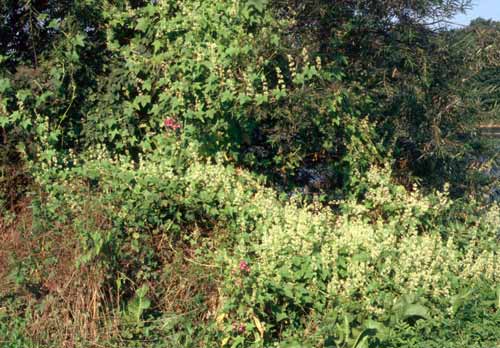 Wild cucumber is a member of the cucurbit family with domestic relatives like squash, pumpkins and cucumbers, but it does not produce anything edible. This annual plant appears a bit later in the growing season and hits its peak after the end of July and into August. The vine is a light green with alternately placed, palmate, light green leaves that have five points on them. The stems are relatively easy to break, but the tendrils by which they cling, are extremely tough. It grows by wrapping its tendrils in curls and spirals around whatever it is climbing on and goes vertical for up to 15 to 25 feet.

The exuberant display of tiny, white flowers is what usually causes people to stare. The flowers have no scent. Both male and female flowers are produced on the same vine. The female flowers appear as one or possibly two flowers in a group, but the male flowers are large panicles of starry blooms, each with six petals.

Following the flower display, small, green oval fruits are produced. The fruit is about 2 inches long and varied shades of green striping. The fruit are covered with soft spines and look like a small terrestrial blowfish. The seed capsules contain two cavities that will each contain two seeds. The seeds are large, brown, flattened ovals. When the capsules are ripe, an opening appears at the bottom of the fruit and the seeds drop out. At this point, it is possible to see the interior, net-like webbing that held the seeds in place. 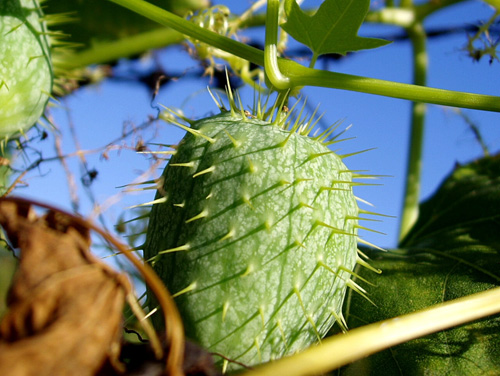 If the wild cucumber vine has covered a shrub or small tree, it could block that plant’s ability for photosynthesis. This could have a detrimental effect on the tree or shrub. Cut the cucumber vine off or carefully remove it from your plant. Those tendrils hold on very tightly.

Don’t let this late summer pass without seeing the wild cucumber plants that ate Michigan. Growing conditions may never have been more favorable.