The downsides of China's explosive urbanization - such as pollution and greenhouse gas emissions - now are joined by an upside: better environmental citizens. 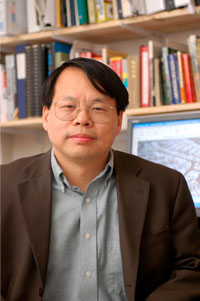 The downsides of China’s explosive urbanization – such as pollution and greenhouse gas emissions – now are joined by an upside: better environmental citizens.

It’s the first time that scientists have weighed employment and leadership when considering environmental behavior in China’s cities. In a paper published in a recent edition of the British journal Environmental Conservation, scientists at the Center for Systems Integration and Sustainability (CSIS) at Michigan State University and collaborators in the United States and China show that city size – especially those with large numbers of good jobs – leads people to pro-environmental behaviors such as recycling plastic bags and sorting their trash.

“It is essential to study human behavior because it directly affects the environment,” said Jianguo “Jack” Liu, CSIS director, AgBioResearch scientist and a co-author on the paper. Liu also holds the Rachel Carson Chair in Sustainability at MSU. “As China is the world’s fastest growing economy and cities are the economic engines with severe environmental challenges, understanding environmental behavior of urban residents in China is particularly important.”

Xiaodong Chen -- who conducted the study while working on his doctorate at MSU -- and his colleagues took advantage of China’s General Social Survey of 2003. That year, some 5,000 respondents in urban areas of various sizes were asked specifically about their environmental behavior.

The study also noted that the workplace appears to be a strong leader in environmental education, a dynamic that may be particularly powerful in China, which has a tradition of policies and regulations being shaped from the top down. Employers, with their accompanying status and political power, are proving to be powerful drivers of conservation, and those workers who are workplace leaders report the most environmentally friendly behavior.

As its urban areas continue to grow, China can use the findings to determine which audiences to target to encourage behaviors that can help counter the environmental costs associated with rapid economic growth.

The study was administered jointly by the Survey Research Center of the Hong Kong University of Science and Technology and the Department of Sociology at Renmin University of China.

In addition to Liu and Chen, Nils Peterson and Graise Lee of North Carolina State University; Vanessa Hull, a doctoral candidate in CSIS; Chuntian Lu, a doctoral student in MSU’s sociology department; and Dayong Hong of Renmin University in China are co-authors of the paper. The research was funded by the National Science Foundation.