Black and pale swallow-worts: These milkweed family members are toxic to monarchs

Swallow-worts are an invasive plant species that kill the larvae of monarch butterflies, are toxic to deer and livestock, and choke out more desirable plant species.

Editor's Note: With monarch sightings at a peak, and increased interest in the invasive swallow-worts, we are reposting this news article originally published in June 2017. Readers are encouraged to report any potential sightings of the swallow-wort to the Midwest Invasive Species Information Network by signing up for an account and reporting the signing or downloading their app.  The original story follows.

The public is increasingly concerned about protecting monarch butterflies. Lately, I have been getting more questions about other factors that could be causing adversity to monarchs such as the invasive weed, swallow-wort.

The first I had heard of swallow-worts was when a lady at a conference I attended asked me about how to get rid of them. I soon learned they are on the Michigan invasive species list and can easily outcompete native plants.

Although they are related to milkweeds, and monarchs lay their eggs on swallow-wort, the larvae do not survive. Many insects avoid feeding on them because they are either toxic or distasteful. Swallow-wort is also toxic to deer and livestock.

Swallow-worts are problematic because they release biochemicals into the soil that prevent the establishment of other plant species. The resulting large, dense colonies of swallow-wort interfere with reforestation efforts, cause the loss of rare and more desirable plant species and degrade the habitat for birds and mammals. They produce large amounts of seed that can be transported long distances by wind gusts. To a lesser extent, they also reproduce by rhizomes. 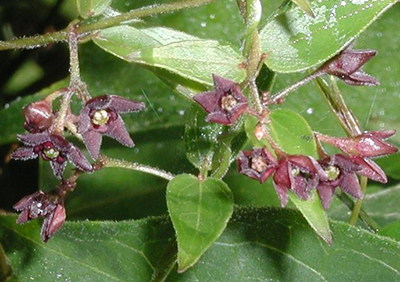 They are adapted to a variety of habitats, including old fields, gardens, conifer plantations and roadsides. They were introduced into the United States in the 1800s.

Swallow-wort has opposite, shiny, dark green leaves about 2–5 inches long and 1–1.25 inches wide. The leaf margins are smooth, with sharply pointed tips and an oval to heart shape. The flowers of black swallow-wort are dark purple with five triangular petals, resembling a small, open star.

The flowers of pale swallow-wort range from pink to deep burgundy, and are longer and narrower than those of black swallow-wort. The flowers of both occur in clusters that attach at the leaf bases. They bloom from June to August in Michigan.

Getting rid of swallow-wort is difficult. Digging out small infestations can work, but only if the entire root crown is removed. Merely mowing or cutting it back can encourage more shoots to form from the root crown and actually make infestations worse.

Several herbicides can control swallow-wort, but may require repeated applications. Since swallow-wort leaves have a waxy cuticle that repels liquids, a surfactant will need to be added. Michigan State University Extension suggests checking the herbicide label to see if a surfactant has already been added and, if not, use one that is recommended on the label.

Another herbicide that works on swallow-wort is triclopyr. It is selective for broadleaf plants, but won’t kill grasses or conifers. Triclopyr should be used once per season as the pods are developing. Herbicides should be applied to plants that are actively growing for best results. Be sure to read and follow the label directions when using any pesticide.

For additional information and photos, see the “Black and Pale Swallow-worts” bulletin from the Michigan Natural Features Inventory.

For information on supporting monarchs and growing milkweeds, see: