Blighted flower clusters were seen at low levels in several blueberry fields. In most cases, the blighted clusters looked like they were caused by Phomopsis, which is characterized by a dark brown discoloration of the twig that bears the flower cluster (photos 1, 2). Initially, the brown lesion is ¼-½ inch long, but can expand to several inches in length in a couple of weeks and can kill additional flower clusters on that same twig. Eventually, the lesion will stop growing and the blighted blossoms will fall off. The causal fungus, Phomopsis vaccinii, overwinters in dead twigs and canes, and in the spring infects the flower clusters, aided by long wetness periods and possibly by frost injury. In some cases, it also appears that the fungus infects flower buds in the summer or early fall and overwinters in live buds. In the spring, the fungus will become active again and kill the bud followed by invasion of the twig. These types of infections are characterized by a dead flower bud surrounded by a brown lesion, while nearby buds would have developed normally. 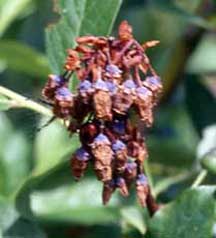 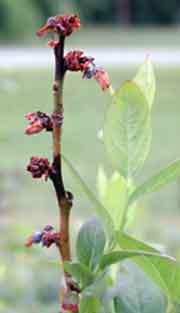 In Michigan, at least four different pathogens can cause blossom blight: Phomopsis vaccinii (Phomopsis twig blight), Monilinia vaccinii-corymbosi (mummy berry flower strikes), Botrytis cinerea (Botrytis blossom blight), and Colletotrichum acutatum (anthracnose). Just by looking at a blighted blossom, it may be difficult to identify the causal agent unless fungal growth is present, so it is a good idea to inspect the cluster with a hand lens or magnifying glass. In the case of mummy berry flower strikes, a layer of gray powdery spores is present, but restricted to the flower stem or cluster stem (photo 3). In general, flower strikes are much less common than shoot strikes, so it is unlikely to have flower strikes without shoot strikes. Spores produced on flower strikes behave similarly to those produced on shoot strikes and infect the stigmas of recently opened flowers. 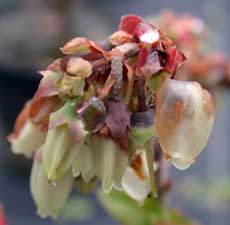 Botrytis blossom blight, caused by Botrytis cinerea, may occur during or after very wet and cool weather and is characterized by fluffy grayish brown spores that are present all over the blossoms (photo 4). Often, leaves and twigs are also showing blight symptoms. Considering the relatively warm and dry weather conditions we’ve had so far, Botrytis is not a likely cause of the blossom blight currently observed in blueberry fields in Michigan. Anthracnose blossom blight looks a lot like Phomopsis twig blight and does not have very diagnostic features to distinguish it from Phomopsis. Incubation in the laboratory is necessary to identify the causal agent. 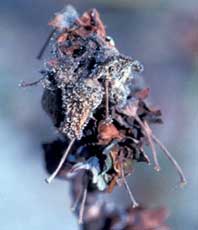 To scout for blossom blight, walk several rows in a blueberry field and scan the bushes for symptoms. When you find any, inspect the flower clusters for twig lesions and fungal sporulation and possible presence of insects or insect frass. To quantify disease severity and changes over time, pick five random bushes and record the number of blighted blossoms per bush every one to two weeks. Record numbers of blighted blossoms, type of sporulation, and average lesion length of twig lesions.