Bounce dryer sheets show potential for fungus gnat control in a greenhouse due to the compound linalool, which repels adult fungus gnats. 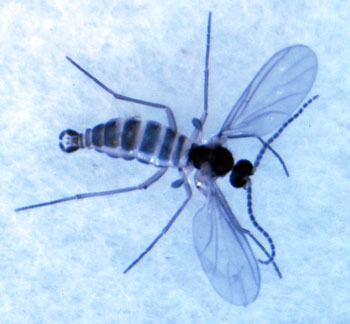 Ornamental greenhouse growers are familiar with fungus gnats (Bradysia spp.), which are a common nuisance in production areas (see photo). While the adults do not damage plants but often succeed in annoying employees, the fungus gnat larvae feed on plant roots, resulting in damage. Growers can monitor populations of fungus gnat larvae by sticking a slice of a potato in the growing media and scouting for larvae. Yellow sticky cards are an excellent way to also monitor populations. If your greenhouse facility has boom irrigation, consider attaching the yellow sticky traps to it in order to capture some of the fungus gnat adults.

According to Michigan State University Extension, insecticides or biological control agents can be used to keep their numbers under control. But could there be a simple household item that could reduce the number of larvae in the media? Bounce dryer sheets have been found to repel adult fungus gnats in the laboratory.

Raymond Cloyd and his colleagues at Kansas State University tested whether Bounce original scent dryer sheets effectively repelled fungus gnats as compared to moist growing media or water. They built an experimental apparatus that had two compartments opposite of each other, but both connected to a central compartment. The fungus gnat adults were released into the central compartment. After two days, the number of living and dead fungus gnats both on and off yellow sticky cards were recorded. For all experiments, the number of fungus gnat adults in the compartment with the moist growing media or water was approximately double of that in the area with the dryer sheet.

What compound in the dryer sheet could be repelling this nuisance pest? Linalool is the most prevalent compound in the dryer sheets. It is often used in perfumes, but is found naturally in lavender and basil plants. It is likely the cause of the repellant behavior in this laboratory study. Other researchers have found that the same isolated compound is lethal to other insects and mites.

In the future, these common household items could be placed in larger growing containers in commercial production to repel fungus gnat females from laying eggs in the media. However, this interesting new strategy is still being investigated and using it as a practical solution is not yet recommended. Cloyd and his colleagues continue to explore the effectiveness of this strategy with dryer sheets of different ages, moisture contents and in practical production scenarios.

Currently, the best way to prevent fungus gnats in your greenhouse is to have excellent sanitation. Be sure to remove weeds on the inside and outside of your greenhouse, improve drainage in your facility to prevent standing water, and clean algae off of greenhouse surfaces. Growers should allow plants to dry out between watering, which deters the development of fungus gnat larvae.

Also, grow your crops in a “lean” manner – adequate but not over-fertilizing – which prevents algal build-up in overly wet media. Growers should also consider modifying their media mixture if the problem persists; fungus gnat larvae develop best in media with high organic matter or bark. MSU Extension recommends using 125 to 150 ppm of a fertilizer containing micronutrients for most crops.

Growers can find reliable control with imidacloprid products (Marathon, Benefit) and other neonicotinoid insecticides (Safari, Tristar) applied as a soil drench. Insect growth regulators with ingredients such as azadirachtin (Azatin XL) or pyriproxyfen (Distance) may also be effective. If you elect to implement a biological control program, apply insect parasitic nematodes (Steinernema feltiae) as a drench and release Hypoaspis predator mites, which serve to reduce larval numbers in the soil.

To learn to rear your own nematodes, visit the do-it-yourself guide. To learn more about fungus gnats and their management, please visit the Kansas State University fact sheet, “Fungus Gnat: Management in Greenhouse and Nurseries.”

Note: Endorsement of individual products is not intended. Criticism is not implied of products not mentioned.