Consumers and landscape professionals need to be aware of three important pests that can plague the boxwood shrub.

Boxwood, Buxus spp., is a popular shrub in Michigan landscapes that is host to the boxwood leafminer, the boxwood mite and the boxwood psyllid. If you are planting new boxwoods, Michigan State University Extension recommends considering varieties that are insect and mite resistant.

Boxwood leafminer, Monarthropalpusi flavus (Diptera: Cecidomyiidae), is the most serious insect pest of boxwoods. This small fly is native to Europe and widely distributed throughout the United States. The leafminer causes serious damage to boxwoods and heavily damaged plants will become quite unattractive. The larvae feed between the upper and lower leaves, which causes blistering and discoloration. 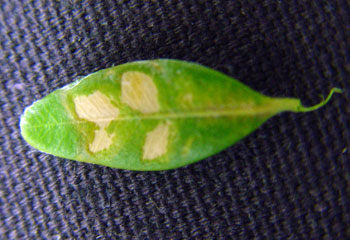 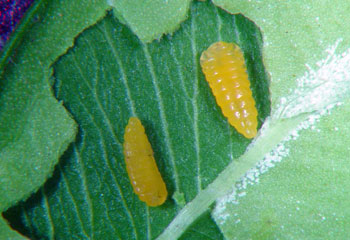 The larvae are yellowish-white and a little over 0.125 inches long. The adult boxwood leafminer is an approximately 0.1 inches long, delicate, orange-yellow to red, gnat-like fly. The partly grown larvae over-winter in their mines. The larvae grow rapidly as the weather begins to warm. In early to mid-May, when weigela blooms, they turn into orange-colored pupae and emerge as a fly. After mating, the female inserts her eggs deep into the leaf tissue and the eggs hatch approximately three weeks later. The larvae grow slowly as they eat away inside the leaf. In Michigan, there is a single generation each year.

Control of the boxwood leafminer should begin with the selection of the more resistant varieties mentioned above. Pruning the foliage before adult emergence or after egglaying ends will help to reduce the overall population of egglaying adults. Chemical control is difficult because the application must be timed with the emergence of the adult flies. An application of an insecticide spray when the adult flies emerge – this corresponds to when weigela is in bloom – can reduce populations. Insecticide sprays containing bifenthrin (Talstar), carbaryl (Sevin), cyfluthrin (Tempo or Bayer Advanced Garden Insect Control) or malathion are among the recommended materials that can be applied to control the adult flies. Imidacloprid, a systemic insecticide (Merit or Bayer Tree and Shrub Insect Control), will control the larvae inside the leaves and does not require precise timing. This product should be applied in mid- to late April.

The boxwood mite, Eurytetranychus buxi, is a spider mite that feeds on the undersides of leaves and is difficult to see even with a hand lens. Infested leaves appear to be pin-pricked or stippled with tiny white or yellow marks. The boxwood mite is a pest of both European and American boxwood varieties. Japanese boxwood is less susceptible. The application of high nitrogen fertilizers may lead to higher numbers of this mite.

Like most other spider mites that plague Michigan landscapes, the boxwood mite overwinters as eggs on the undersides of leaves. These eggs are greenish, round and flat-topped. They generally hatch in May and complete a generation in two to three weeks. Since multiple generations occur each year, it is important to apply control measures early in the season on plants that show high levels of the mite feeding injury. This mite is more active in the spring and early summer. Adult mites are greenish-brown. They may be found on the upper or lower surface of leaves. Heavy infestations may result in defoliation. Like other mite pests, infestations are often worse during dry, dusty conditions. 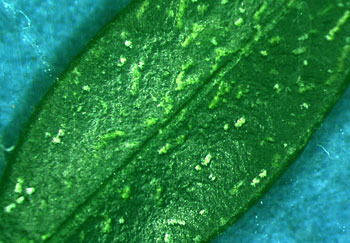 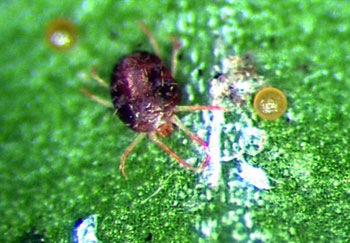 Control of boxwood mites follows that of other spider mite pests. One can try washing mites from the foliage with a stream of water. Summer rates of horticultural oil are also effective. A more aggressive approach includes treating with abamectin (Avid), bifenthrin (Talstar), malathion or oxythioquinox (Morestan) during the first two weeks in May.

The boxwood psyllid, Cacopsylla busi, is a less serious pest that occurs wherever boxwoods are grown. It causes cupping of leaves and may affect twig growth, but the damage caused is purely aesthetic and not as destructive as other boxwood pests. The boxwood psyllid is a common pest of all boxwoods, but the American boxwood (Buxus sempervirens) is most susceptible.

This insect overwinters as a tiny, orange egg deposited in the bud scales. The eggs hatch in the spring when the buds of the host plant open. The nymphs immediately begin to feed and develop white, waxy strands over their bodies. Winged adults appear by early June. After mating, the female deposits her eggs between the bud scales of the host plant. There is one generation each year. 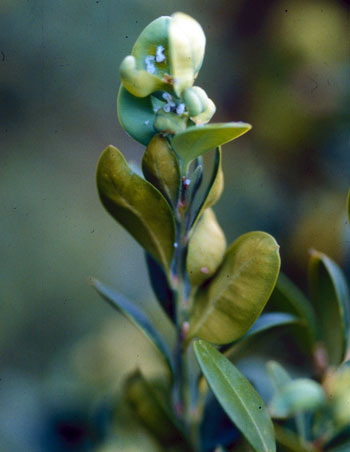 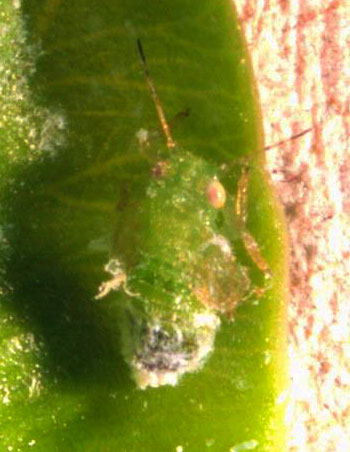 The nymph stage damages the host plant by feeding on newly developing foliage, causing the leaves to become cupped. This cupping conceals the psyllid and provides protection while feeding; however, the damage to the host plant is purely aesthetic.

This minor pest can be controlled with many of the insecticides mentioned above for other boxwood pests. An application should be made when young psyllids are present, in early May.

What’s eating my viburnums and how can I stop it?