Breakfast on the Farm improves consumer trust in dairy farming

Place-based education provides the opportunity for consumers to experience modern farming in their local communities.

Breakfast on the Farm (BOTF) continues to increase the trust consumers have in agriculture production systems. One of the goals of BOTF is to show consumers how modern farms work to give them a better appreciation of what farmers do to produce safe food, care for their animals and the environment. BOTF is a form of place-based education that provides the opportunity for consumers to experience the culture and setting of modern farming in their communities. Such educational tours put a face on the families who own the farms and this helps to create ties between participants, farmers, other industry professionals and volunteers. BOTF is an industry-wide program coordinated by Michigan State University Extension to help local producers and ag industry professionals educate consumers about modern agricultural practices.

Continued efforts with exit surveys show that participants indicate BOTF educational tours increase their level of trust in farmers in several areas. Comparing consumer impressions about how farmers care for food-producing animals, the environment and safe-guarding milk before and after their tour show large shifts in their level of trust. Surveys were handed out as individuals exited the tour and participants were asked to rate what their level of trust was on several topics before and after their tour. Since this was done as they left, their responses are an indication of their perceived change in trust. 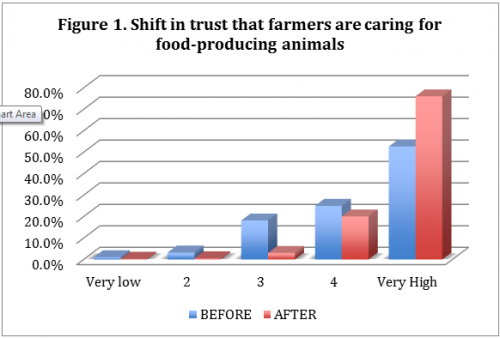 Respondents were asked to rate their level of trust in farmers regarding five areas of farm management: Animal housing, animal care, milk safety (antibiotic free, etc.), protecting the environment and water quality. When asked what their level of trust is for farmers caring for food producing animals, 78 percent of all respondents indicated they had ‘high’ or ‘very high’ trust before and 96 percent indicated they had ‘high’ or ‘very high’ trust after their tour on a 5-point scale from ‘very low’ to ‘very high’. For first-time visitors, i.e., those making their first visit to a dairy farm in the past 20 years, their trust levels increased from 66 percent before to 96 percent after their tour. They had a greater increase while their level of trust before was much lower than for all respondents.

Before the tour 76 percent of all participants had ‘high’ or ‘very high’ trust that farmers are caring for the environment and this shifted to 96 percent after their tour. These values were 66 percent and 97 percent, respectively, for first-time visitors. Trust level in farmers’ safe-guarding milk shifted from 80 percent to 97 percent for all and from 69 percent to 97 percent for first-time visitors. First-timers again had a greater increase as their before trust was lower than for all respondents.

In general, first-time visitors had lower trust before and a greater increase in trust as a result of their tour. Participants had the lowest trust before for water quality with increases of 22 percent and 35 percent for all respondents and first-timers, respectively with similar increases for providing good housing. These two areas saw the greatest increase in trust. Figure 1 demonstrates the significant shift that occurred in trust that dairy farmers provide good care for food producing animals. Along with the shift to ‘high’ and ‘very high’ level of trust, the 1 percent and 3 percent who had ‘very low’ and ‘low’ trust before dropped to .3 percent and .5 percent, respectively, after the tour.

Why did trust increase?

If participants had an increase in trust in farmers for one or more of the management areas, they were asked to indicate to what degree each of five aspects of the farm tour influenced their increase in trust. Depending upon the aspect of the tour, from 915 to 957 of 1406 individuals provided responses suggesting that 65 percent to 68 percent had some increase in their level of trust. Those not responding to these five aspects either had high trust before or their trust did not change as a result of their tour.

Of those who felt their trust increased for at least one of the management areas, 43 percent and 39 percent rated “The openness of the tour to see how things are done on a modern farm” as ‘a major factor’ or ‘very important’, respectively. The scale ranged from ‘a major factor to ‘not a factor at all’. In addition, 44 percent and 36 percent rated “How farmers prevent milk from cows treated with antibiotics from being sold to the consumer” as ‘a major factor’ or ‘very important’, respectively. Similar ratings occurred for “My comfort with how animals are housed and managed” and “My understanding of how the environment is being protected” with slightly lower ratings for “Reading the educational signs and displays”. There was a large number (35 percent) who indicated that another reason was a major factor for their increase in trust.

Comparing consumer impressions about how farmers care for food-producing animals, the environment and how farmers safe-guard milk before and after their educational BOTF tour shows large shifts in their level of trust. Surveys also show that a number of factors are important to these shifts in trust. These include the openness of the tours, how farmers prevent milk from cows treated with antibiotics from being sold to the consumer, seeing how animals are housed and managed, learning how the environment is being protected and reading the educational signs and displays.

Breakfast on the Farm wraps up another successful season

Resources for veteran careers in agriculture

Slow Moving Vehicle triangles - be on the lookout!