Broad mites can be controlled using insecticides or biological control.

Western flower thrips and aphids have long been the most challenging insect pests in greenhouses. More recently, broad mites (Photo 1) have been posing a more serious threat for greenhouse growers. Broad mites are a potential threat to some of the most important Michigan floriculture crops. According to my previous article, “Attention scouts: Crops that are insect “magnets” in the greenhouse,” the top 10 plants that are attractive to broad mites are New Guinea impatiens (Photo 2), zonal geraniums, Thunbergia, Torenia, verbena, Rieger begonias, Scaevola, angel wing begonias, ivy geranium and buddleia.

So, why are broad mites so concerning? Broad mites are concerning because they are microscopic and are very difficult to see with the common 5x to 10x hand lens. You must send samples to a diagnostic lab or contact your local Michigan State University Extension floriculture educator for a positive diagnosis.

In addition, greenhouse scouts and growers usually notice the plant damage after the populations are already very high and the crops are unsalable. Often times, the damage to the upper leaves near the apical meristem is only noticeable 20 to 30 days after they began infesting the crop.

The greatest populations of broad mites when scouting crops are often not on the plants with the greatest amount of damage. By the time the damage is significant, broad mites have moved on to the neighboring plants with “fresh, new, tasty” tissue. Therefore, greenhouse scouts should actually sample the plants adjacent to those with heavy feeding damage. 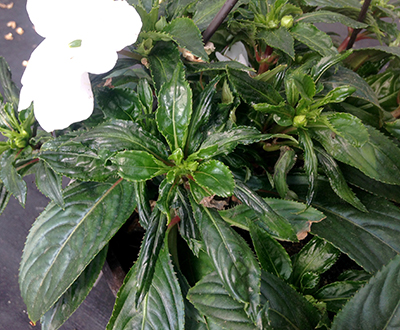 The following products are recommendedfor broad mites: Avid, Akari, Judo, Pylon, SanMite, and 2% horticultural oil. For growers interested in using biological control, the predatory mite, Amblyseius swirskii (Photo 3), has been shown to be effective against broad mites. However, cuttings and propagules must be free of pesticide residue in order to effectively use biological control for broad mites. Contact your young plant or cutting supplier to learn about the plant’s pesticide history. 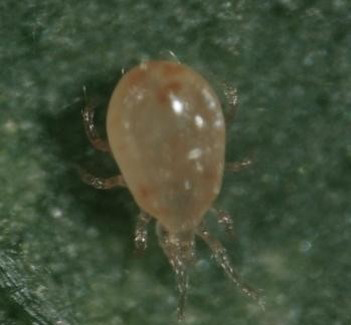 Greenhouse growers who are not getting adequate control of broad mites may want to consider a weekly release of A. swirskii. Contact your local biological control specialist or consultant to develop a strategy for preventative broad mite control.

For more information on the location of broad mites in the crop and about an intensive sampling program, read “Broad mites in ornamental crops – Part 2: Scouting and sampling.”