Nursery growers need to identify and understand the impacts of brown marmorated stink bugs, as well as control strategies, both short and long term.

In 2010, Michigan officially had the first find of the brown marmorated stink bug (Halyomorpha halys) in the southwest corner of the state (Berrien County). Since then, it has been found in 12 of our counties all in the Lower Peninsula according to Michigan State University Extension. Most of the concern with this pest has been with fruit and vegetable industries because of the damage this stink bug does to fresh fruit and vegetables. However, nursery growers need to be able to identify this stink bug from others. They are shield-shaped true bugs with long, piercing–sucking mouthparts. The immatures or nymphs resemble the adult except for color and wing lengths. Like other stink bugs, they emit a strong odor when disturbed or crushed. 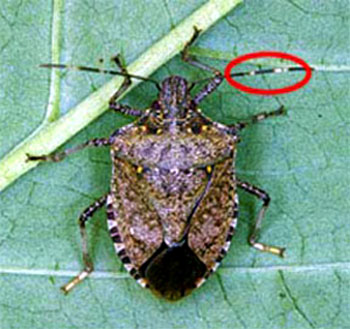 Nursery crops at risk include:

In addition, “Brown marmorated stink bugs: Resources for identifying them and their hosts” will provide more potential host plants.

Brown marmorated stink bugs have long, piercing-sucking mouthparts for ingesting plant juices. When it is feeding it also injects saliva into the plant, which may be toxic. They do not cause visible tissue damage initially, but leaves and shoots may become mis-sharpened, distorted or “cat faced.”

One to two generations occur in a season and the adults will move into buildings and homes to overwinter and can cause grief as a home invader. This is similar to the overwintering habit of boxelder bugs and Asian ladybird beetles.

Control programs on a long-term scale are in a research phase with hopes that one of the tiny wasps from China that is being evaluated as an egg parasite will work out. In addition, a trapping system is being evaluated to see if it has merit. Researchers in other states are evaluating insecticides that may work better than others as these insects can be hard to kill. Ones that work best include acephate, acetamiiprid, cholopyrifos, cypermethrin, dinotefuron and permethrin.

If you think you have found brown marmorated stink bugs in your nursery, please collect specimens and send them to MSU Diagnostic Services. To preserve and protect fragile specimens, it’s always best to submit insects in a small, leak-proof vial filled with rubbing alcohol or white vinegar. Place the vial in a small, Ziploc baggie, then into a small box or mailing tube and mail to:

Be sure to include a note with your contact information and the complete address where the bug was found.