With warm weather returning to the region, the early growth of vines will start and we will move into the bud swell growth stage. This is a time when growers should monitor for cutworms and flea beetles, two early season pests that can feed on buds and limit crop yield. It is interesting to note that in 2012 I was writing a similar article at the end of March, having seen the first grape flea beetle (steely beetle) on March 19. This is a different spring, but the later vine growth is expected to line up with later insect development so that we should still expect these pests during bud swell. There are good rules of thumb for deciding whether damage from these insects warrants control, and information on scouting and other management components developed by Michigan State University Extension is provided below.

The term cutworm covers many species in the moth family Noctuidae, and as their name suggests, these insects are nocturnal. Vineyards on light-textured soils are often the most heavily infested. Both the adults and the larvae are only active at night, and the larvae can climb up onto vines during very cool nighttime conditions. During the day, cutworms hide in the soil or leaf litter and can be found in the top layer of soil.

Many of these insects feed on weeds, but some climb the stems of plants to feed on buds and other young foliage. These climbing cutworms are the ones causing damage to grapevines. Direct observation of feeding by the larvae requires a late-night trip to the vineyard, but their damage is quite easy to see. In Michigan vineyards, the spotted cutworm, Amathes c-nigrum, is our main pest species, and the larvae feed on buds and may also feed on leaves until the shoots are 10 to 15 cm long. However, it is the feeding on small buds that has the greatest potential for economic damage.

Cutworm feeding on a bud can reduce the crop by one to two clusters, so the high potential for rapid damage by cutworms requires growers make good management decisions. Even 2 percent percent bud injury is an action threshold for an insecticide treatment to prevent further damage, so vineyards should be scouted during the period of bud swell to identify regions with cutworm pressure (see below).

The flea beetle attacks buds of both wild and cultivated grapes and is another early season grape pest. The adult insects move to the vines at bud swell and usually are localized within the vineyard. Sites near overwintering habitats such as woods or abandoned vineyards are especially at risk. Beetles are most easily seen during warm sunny weather when they tend to be on the top of vines, usually mating or feeding on canes and buds. 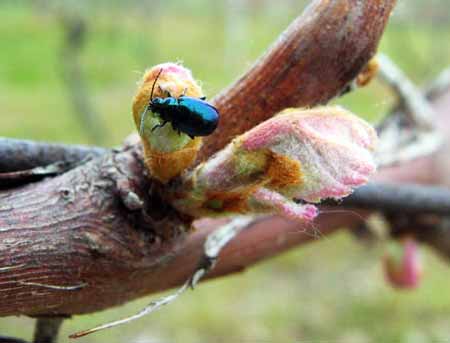 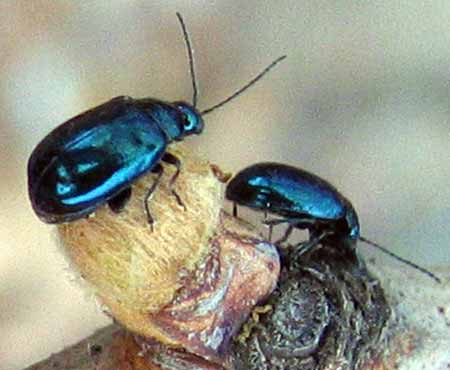 Adults are shiny blue, about 4 to 5 mm long and have strong hind legs that enable them to jump if disturbed (hence the name). The overwintering adults cause the greatest damage by boring into the developing bud and hollowing out the inside, while the larvae and summer adults feed on leaf tissues. Bud feeding is similar to that caused by cutworms, with similar effects to the vine (see above cutworm description). 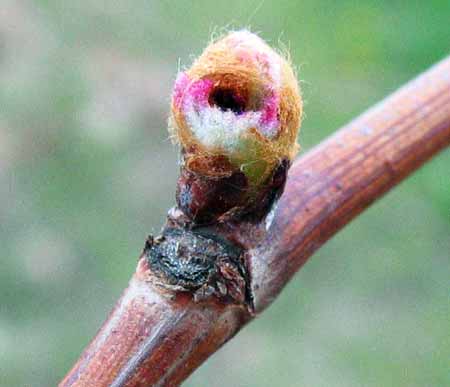 Wherever possible, cleaning up overwintering sites, wasteland and woodland, near to vineyards can help combat grape flea beetle.

Growers should watch for damage by cutworms and flea beetles, especially if the vines remain in the susceptible bud swell stage for a while with cooler weather. Cutworms tend to be more of a problem in sandy sites, so these should be prioritized for scouting. Both cutworms and steely beetles can cause damage quickly if the temperatures warm up, and since they are difficult to catch “in the act,” regular scouting for the first signs of damage is essential to prevent significant bud loss.

An action threshold of 2 percent damaged buds is recommended in juice grapes, and this can be determined by sampling 10 buds on each of 10 vines spread through the vineyard. Thresholds in winegrapes may be lower due to the higher value of the crop, but there has been little formal research on this topic. Still, it is clear that the potential damage justifies scouting and management if cutworm damage is detected.

As mentioned above, once the shoots get past bud burst and into the 1- to 3-inch range, the danger from flea beetles and cutworms is diminished significantly.

Vineyards that are weedy tend to have more cutworm problems, presumably because the larvae have more places to hide and conditions are better for them. Weedy vineyards also provide more places for the cutworms to hide from sprays applied for their control, so improving weed control is one component of an IPM program to reduce cutworm damage.

Leaving some extra buds is a potential strategy for hedging your risk against cutworms (and frost) injury. Scouting is still required, though, to make sure the damage doesn’t exceed the number of extra buds left behind.

An appropriate insecticide application should be considered if scouting shows significant damage is occurring, and assessments of damage should include wooded borders where flea beetle pressure may be higher and areas where cutworms have been a recurring problem.

Lorsban Advanced is labeled for cutworm at 1 quart per acre in at least 50 gallons of water per acre. Delegate is a reduced risk option registered for cutworm control (3 to 5 oz/acre). There are also a number of pyrethroid insecticides registered for use against cutworms including Mustang Max (2 to 4oz/acre), Danitol (10.6oz/acre) and Brigade (3.2 to 6.4oz/acre) that provide excellent control of cutworms and flea beetle. Sevin is also registered for use against flea beetles and has performed very well in observations of treated vineyards at 2 qts/acre.

Recent research in Washington State vineyards has shown excellent protection against cutworms using only trunk sprays of a pyrethroid. This approach targets the spray to the trunk surface, and larvae have to climb up through the residue to reach the buds. This significantly reduces the cost of application, but it is important to realize that this will not protect the upper canopy from flea beetle feeding.