For many farmers in Michigan’s Upper Peninsula, cover crops need to provide forage as well as soil improvement to be practical.

There is great interest across Michigan agriculture in cover crops and their many benefits to soil health and crop production. Upper Peninsula farmers displayed their interest by turning out for cover crop educational meetings held by Michigan State University Extension in February 2015. However, most of the cover crop research and available information relates to annual crop rotations in areas with longer growing seasons.

In Michigan’s far north, cropping systems often include long rotations of perennial forage broken by small grains. This is especially true in the eastern and western farming areas of the Upper Peninsula where untiled clay soils are most common. Soil organic matter levels on these soils are likely to be quite high, although few organic matter soil tests are documented. On the better drained, coarser-textured soils in the central Upper Peninsula, more annual cropping is common, including corn, potatoes, small grains, field peas and other crops. Tillage practices generally do not include no-till. Across the region, the relatively short growing season limits use of cover crops as a fall-seeded option following harvest. The alternative is to find economically practical ways to include soil-building cover crops with good utility as forage in northern cropping rotations, and hopefully build up soil organic matter depleted by tillage.

On clay soil areas in the Upper Peninsula, many perennial forage fields are harvested as a combination of hay and pasture. When that old field on untiled clay soil gets worked up for a new small grain crop with hay seeding underneath, grazing can become a problem for the following season. Hoof action from cattle can damage the new forage seeding until root development becomes dense enough to support livestock under moist soil conditions. Tillage also results in a loss of soil organic matter through oxidation.

Two Upper Peninsula farmers from Ontonagon and Rudyard, Michigan, are approaching this issue by considering a no-till approach to re-establishing pasture on clay soil. A sequence of annual “cover crops” with known value for grazing will be no-tilled on a test area on both farms over three years. Harvest will include carefully managed grazing and mechanical hay harvest if necessary. In spring of the third year, the final perennial forage seeding will be no-tilled, along with a small grain/forage pea mixture to provide midseason grazing. Soil organic matter and other soil health measurements will be collected as the project moves along. This plan is meant to establish a new pasture or hay stand without tillage while providing productive grazing of annual forages on firm soil throughout the multi-year process. 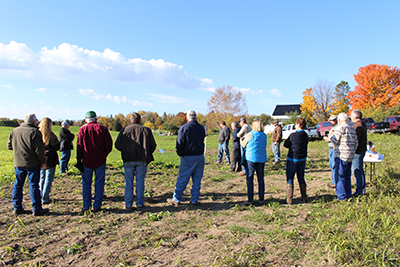 In areas where annual cropping is more common, the interest in cover crops may fit into a more conventional scheme. On Oct. 15, 2015, Menominee County farmers attending an MSU AgBioResearch and Extension cover crop demonstration field day in Daggett, Michigan, saw several cover crop possibilities planted in replicated strip plots following harvest of a short season sorghum silage crop. The cover crops include oilseed radish, winter rye, oats, oats and radish and a “control” strip with no cover crop. This project will continue in 2016 with cover crop termination and tillage as needed, planting and managing a new corn silage crop, and sampling to detect yield differences based on cover crop effect. A large change in soil organic matter is not expected after only one year; however, Solvita testing is planned to check for differences in soil biological activity. This can be an indicator that good things are happening below ground.

This project was developed based on farmer interest and informal observations of the positive effect of cover crops in recent years and is meant to document yield impacts, if any, of cover cropping on-farm. Additional efforts add to our experience, including a small-scale, single year 2013 cover crop evaluation in Alger County, cover crop evaluations on the MSU farm in Chatham, Michigan, and a cover crop demonstration strip on a Chippewa County farm in 2014.

Gradually, meaningful and documented results of cover cropping efforts in the Upper Peninsula are being gathered.