Butternut woollyworms, a type of sawfly not often found in Michigan, have been attacking walnuts in southern Michigan. Control measures may not be necessary this late in the season.

In late August 2014, I walked into my office to find a bag full of walnut leaves. Nothing unusual about that; I often get walnut leaves brought into the office throughout the summer that are damaged by fungal diseases, fall webworms or maybe a petiole borer. Inside the bag feeding on the walnut leaves were strange larvae covered in a thick, white mat that reminded me of knotted-up wool. Nature really is amazing! Thirty years working in forestry and horticulture and I had never seen this creature attacking walnuts. Working with Michigan State University Extension is very humbling at times, there is always something new to see and learn.

Though I had never seen this pest on walnuts, I had seen a similar insect attacking dogwood leaves, called a dogwood sawfly. The sawflies I have seen feeding on the dogwood leaves are also woolly white larvae that resemble a caterpillar, but sawflies are different since they do not turn into a moth or butterfly. The adult sawfly is a small, wasp-like insect that does not sting. The name sawfly comes from their unique saw-like ovipositor, a tube-like projection which the female uses to lay eggs into plant tissue. Sawflies that are common in Michigan include the pine sawfly and the mountain-ash sawfly. The larvae of sawflies feed in groups in close proximity to each other, stripping foliage as they move through the tree.

So following the “looks like a duck, quacks like a duck” principle, I checked my reference books and the Internet for a sawfly that feeds on walnuts and found the culprit. The mystery insect is a butternut woollyworm, Eriocampa juglandis, a type of sawfly that is found across the Northeastern United States and Southern Canada. So it is not a new pest of walnut and it is presumed to feed throughout the range where walnuts grow, also feeding on butternut and hickories.

For the butternut woollyworm, adult sawflies emerge from the soil in spring to mate and lay their eggs. The female cuts small slits into the midribs on the upper surface of walnut leaflets and deposits her eggs into the slits. Eggs hatch in about one week and larvae begin to feed on the underside of the leaves. At first, the small larvae chew small holes between veins, but as they grow into larger larvae they will consume entire leaflets leaving behind only the larger veins and midrib. 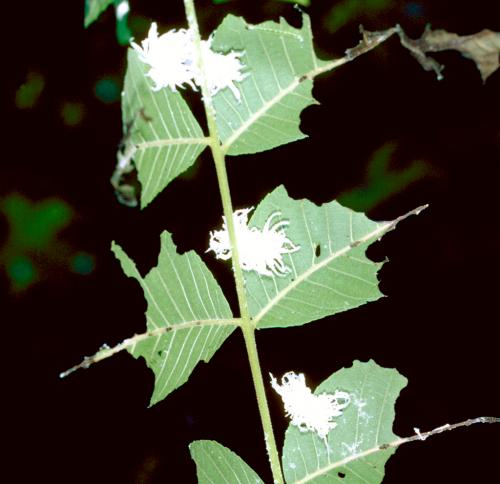 Newly hatched larvae do not have the white covering, but it quickly develops. Through the summer, the larvae grow to about 2 centimeters in length. After each molt, the whitish, wool-like substance is left behind with the shed skin. It is believed that the whitish covering helps to disguise the insect from predators. Fully grown larvae drop to the ground where they survive the winter in cocoons in the soil. Within the cocoon the larvae change into adult sawflies that emerge in the spring to start the cycle again.

So how common is the butternut woollyworm in Michigan? I contacted MSU Diagnostic Services to see if it was frequently seen. Though walnuts and butternuts are commonly found in Michigan, this pest is not often found. Since it was found feeding in late summer, it would not be as big of a concern as the leaves had most of the summer to produce sugars for future energy needs of the tree.

Will it be back next year in larger numbers? Maybe, but it is unlikely that it will be a problem that will impact the health of the tree. A study from Auburn University found that heavy infestations of butternut woollyworm did not result in tree mortality in Alabama and populations fluctuated greatly over time. I would believe the same would be true here.

Since very few references mention this insect in Michigan, I will be more intent on watching for it next summer to see if it follows the same pattern of fluctuating populations as it did in Alabama. Though this pest at first glance appeared to be a serious problem by stripping foliage from trees, a smart gardener always identifies the problem before making any pesticide applications. In the case of the butternut woollyworm and other late-season pests in the landscape, it may not be necessary to use control measures.