Carpet beetles are the ultimate household scavengers and most homes older than two years probably have resident populations of carpet beetles. The reason being is that the larval stages can eat most everything of plant and animal origin, both manufactured and naturally occurring. Carpet beetle larvae prefer dried protein, so they like to eat dead insects, hair, dander, woolen rugs and clothing, silk clothing, wool carpeting, felts, skins, furs, feathers, upholstered furniture, wool blankets, leather, and dried meats, beans, peas, corn, wheat, rice and many other seeds and seed products. These insects also occur outdoors where they feed in and under dead animals and in the nests of birds, wasps and bees.

The larvae or grubs are small, reddish-brown and hairy. Larvae develop in dark, undisturbed locations and under normal conditions require about a year to complete their life cycle. Larvae are responsible for all of the feeding damage. Adults are tiny oval-shaped beetles that are often covered with scale-like seta (hairs). They emerge in the spring and commonly congregate on window ledges. Outside, the beetles are commonly found on flowers where they feed on pollen.

Carpet beetles are difficult to control because most times it is difficult to locate the origin of the infestation. The best way to combat carpet beetles in homes is to reduce their food sources. Rooms should be cleaned often enough to prevent the accumulation of hair, dander and other carpet beetle food materials. These insects are commonly found along the edges of wall-to-wall carpet where hair and dander accumulate; and in wool carpets under heavy furniture; and in heating system ducts. Another source of carpet beetles is wall voids (the area inside walls between studs) where dead insects accumulate. Abandoned nests of birds, rodents, wasps and bees that are in or near the house may also serve as the source of carpet beetles.

The main concern of carpet beetles in most cases is not carpets but clothing and other items made of proteinaceous materials such as wool, fur, feathers or silk. For this reason, woolens that have been in storage and undisturbed for over a year should be routinely checked for damage and signs of insects. Carpet beetle larvae are responsible for the nipped treads and tiny holes we find in wool sweaters, coats and pants. Often their cast skins can be found on the clothing or closet shelves.

Preventing carpet beetle damage to clothing begins with dry cleaning or laundering before storing it for the summer. Not only will this kill any carpet beetle larvae present, but laundering also makes the clothing less nutritious for the larvae. We actually enhance the nutritional content of clothing just by wearing it because of the oil and salt that rubs off our bodies and is absorbed by our clothes. We probably improve the taste of the sweater too because we all know that food tastes better with the addition of salt and oil.

After laundering, place cleaned woolens in an insect-free chest or plastic tote that has a tight fitting lid. This should protect the woolens until fall when we resume wearing these clothes. Moth balls placed in an envelope or wrapped in paper can be placed in totes containing woolens that are likely to be in storage for long periods of time. Woolens that are likely never to be worn again should be donated to a worthy cause.

Persistent insecticides registered for use inside homes such as Bayer’s Advanced Home Insect Control or Ortho Home Insect Defense Maxx, can be applied in storage areas, edges of carpeting, baseboards, cracks and crevices to help control these pests. Great care should be taken when using these poisons in the home. Be sure to read and follow all the instructions and safety precautions found on the pesticide label before using any pesticide. 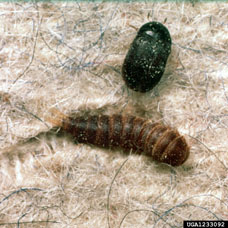 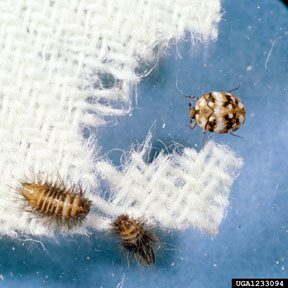 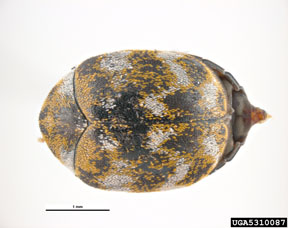 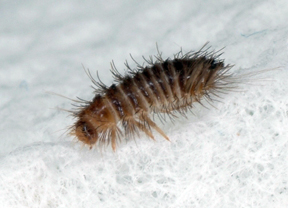 Photo 4. A varied carpet beetle larva.  Carpet beetle larvae are pretty easy to identify because they tend to be the only brown hairy larvae found in homes. Photo credit: Joseph Berger. Courtesy of Forestryimages.org.