Each spring, I receive calls asking what the bizarre orange growth is on Junipers. These strange growths are caused by cedar rust diseases. For most of the year, the only symptom of the disease on the juniper is hard, brown galls that are a half-inch to an inch wide. The pathogen that causes this strange growth form is actually a fungus called Gymnosporangium spp. The fungus first becomes active on the eastern red cedar (juniper) during warm, wet spring weather producing what is called telial horns, or orange gelatinous growths. Spores are released from the telial horns, spreading the disease through the air from the juniper to alternate hosts. 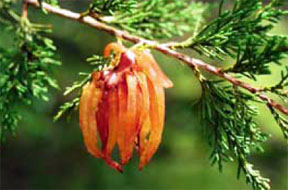 The damage from the fungus is minimal on the juniper, but can be harder on the alternate hosts like the crabapples, often causing serious leaf drop. One method of reducing the problem is to remove infested nearby junipers. Since the disease must start on the juniper before spreading to an alternative host, removal of the juniper stops the primary development of the disease. The disease can be carried on the wind from junipers a distance off, but the farther away it is, the lower the disease pressure.

Fungicide treatments can be useful for reducing the damage if done on a preventative basis. Recommended fungicides can be found on the Ohio State University ExtensionCedar Rust Diseases of Ornamental Plants fact sheet. Once it has been diagnosed on the crabapple, hawthorn or any of the other alternate hosts, it is too late for any treatments in that season.

Resistant varieties of both crabapple and hawthorn are available through local nurseries if you chose to replace plants with chronic problems due to rust disease. Further information can also be found on the Cedar Rust Diseases of Ornamental Plants fact sheet.

Starting and Keeping Bees in Michigan: Rules and Regulations

Compost and Biochar with Brooke Comer