Many growers have made progress in planting, but remain behind their normal pace.

After several days of warm temperatures and significant progress in field work, many growers had a couple days off this week. Rain showers received on Friday, May 10, yielded 0.5 to 0.75 inches across much of the central region. Additional “solid” precipitation was observed on May 12 in the form of snow showers. Temperatures started out the week reaching highs in the upper 70s to low 80s followed by a cool down late in the week with highs only reaching the upper 30s to low 40s on Sunday, May 12. High soil temperatures have generally remained above 50 degrees with lows dipping into the 40s over the past several days.

Sandy, well-drained soils and soils that are well-tiled have been dry enough to work at various times over the past two weeks and are the soils that have accounted for the majority of the planting progress. According to Michigan State University Extension, there are many soils that remain too wet to work and many fields still contain spots that remain wet with some still having standing water in low areas

Cover crops have been developing more rapidly with the warmer temperatures. Cereal rye has one to two nodes above ground (Feekes 6 to 7) and is 12 inches high in many instances. With warm temperatures, development will continue rapidly if measures to control the cover are not taken.

Rapid progress is being made in potato planting. Growers still have wet areas of fields to contend with and significant areas of some fields remain too wet to work. Many growers are a week to 10 days behind their intended planting pace. No emergence has been observed.

Planting of sweet corn is progressing with very little emerging without the aid of row covers.

Emergence of asparagus spears has been a bit behind normal this spring. Spears that were in the field were frosted off on Monday morning. For most, this would have been either the first or second picking that was frosted. 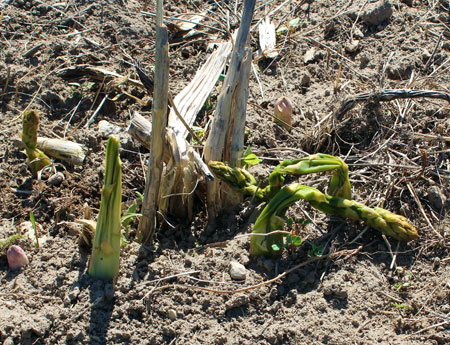 Lows in the mid-20s during the early morning of May 13 damaged
asparagus spears that had emerged. Photo credit: Fred Springborn, MSU Extension

Low numbers of true armyworm and black cutworm moths have been captured in pheromone traps so far this season in Montcalm County. No black cutworm larvae have been observed, however scouting should continue as crops emerge.