Lower high temperatures have relieved stress on many crops in the central region.

High temperatures ranged from the lower 90s to the upper 70s this week at Entrican, Mich. After last week’s heat wave with several days in the high 80s to mid-90s, the cooler temperatures are a welcome relief for most growers and most crops. Average relative humidity levels have been in the 70 percent range. Variable and light rainfall amounts were recorded in the central area over the past week with a few areas receiving 0.25 to 0.5 inches for the week. Many crops, especially those with a high water use rate on sandy soils, are now showing drought stress.

Field planted sweet corn growth stages range from V6 to near harvestable. Much of the crop is growing rapidly, especially under irrigation. Low numbers of European corn borer moths have been captured in pheromone traps. Western bean cutworm moths are being captured in significant numbers with many traps catching over 100 moths this week. Michigan State University Extension advises growers to continue scouting for the egg masses of this pest in pre-tassel sweet corn. 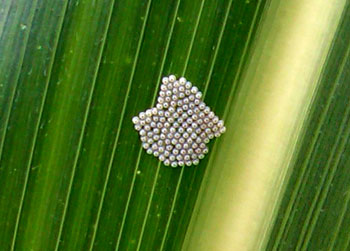 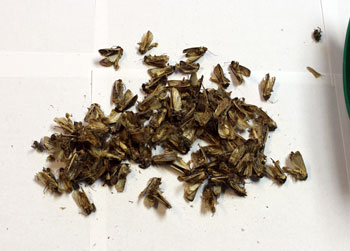 Left, Egg masses are deposited on upper leaves of corn and range from white to purple. Right, Many western bean cutworm pheromone traps in central Michigan are catching 100-plus adult moths this week.

Hilling and cultivation is complete and potatoes are setting or sizing tubers. The find of late blight in Allegan County continues to concern many growers; fungicides applications are being applied to prevent the establishment of the disease and many growers have shortened application intervals. Other diseases present include botrytis and low levels of early blight.

Tomato plantings are generally growing quickly with low levels of foliar disease. Botrytis and early blight have been observed, but at fairly low levels. It is important for all producers to continue to protect tomato plantings from late blight by applying protective fungicides.