The cereal leaf beetle is a small grain pest that is native to Europe and Asia. In 1962, it was found near Galien, Michigan in Berrien County. It has since spread across the Midwest and to the East Coast, and also found in some wheat-producing states in the western United States. Cereal leaf beetle was initially an important defoliator in wheat and oats, but as a pest it is now relatively uncommon in Michigan. The US government and universities such as MSU released several beneficial parasitoids in the 1960s and 1970s, and these natural enemies effectively control cereal leaf beetle in many parts of the Midwest.

Cereal leaf beetle adults overwinter along edges of field. They have pretty dark-blue wing covers, a distinctive red thorax (a red neck), and red legs. They emerge in the spring and lay eggs on the upper surface of small grain leaves. Larvae are white, fat, and hump-backed with a black head and six small legs. However, larvae won’t appear white in the field because they have a unique defense mechanism to avoid being eaten – they smear a covering of excrement over their body, as in the photograph.

Larvae feed for two to three weeks on grain leaves, scraping the leaf surface. Hot-spots in fields appear white or frosted (similar to heavy alfalfa weevil feeding), but damage to an entire field is rare in Michigan. Infestations may be greater along field edges, and greater in oats than in wheat.

Larvae pupate underground in late-May or early June (although the life cycle seems delayed in 2009). There is only one generation per year. New adults emerge and may feed on small grains or corn briefly, but then they spend the rest of the summer in an inactive state along field edges. Thus the only damage occurs in May and early June as larvae feed. 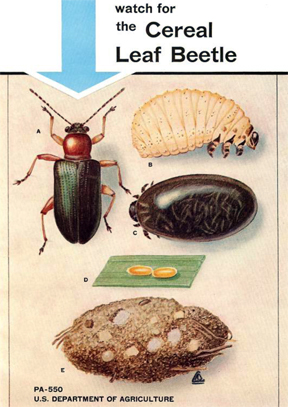 USDA bulletin from 1965 warns farmers
of the then recently-discovered cereal
leaf beetle. 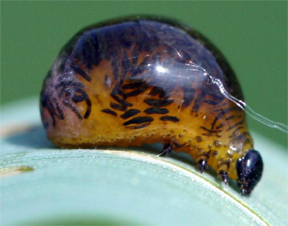 Close-up of a cereal leaf beetle larva. Note
its shiny, wet covering of fecal pellets. This
covering provides a defense against
predatory insects. (If you were a
ladybug, would you want to eat this?) 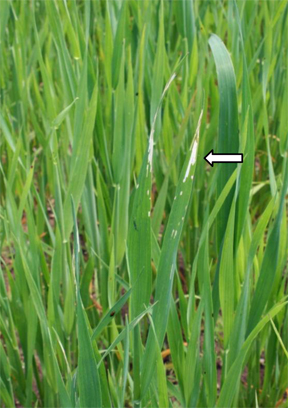 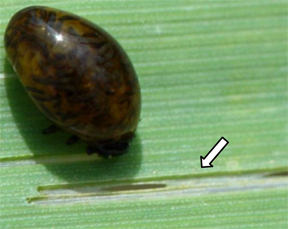 Typical cereal leaf beetle feeding in
Michigan is light and involves a few plants
or a small hot spot in a field. 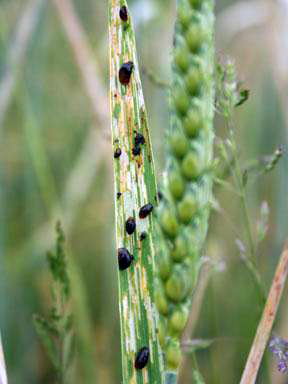 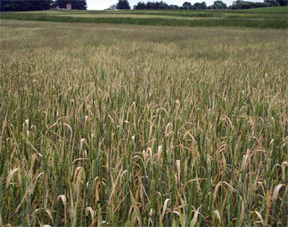 Exceptional cereal leaf beetle damage is rare,
but can occur, particularly in the eastern
United States where parasitoids are not as
well-established. This wheat field in Bucks
County, Pennsylvania is heavily damaged and
has multiple larvae per flag leaf.
Photo credit: J. Tooker, Penn State University.